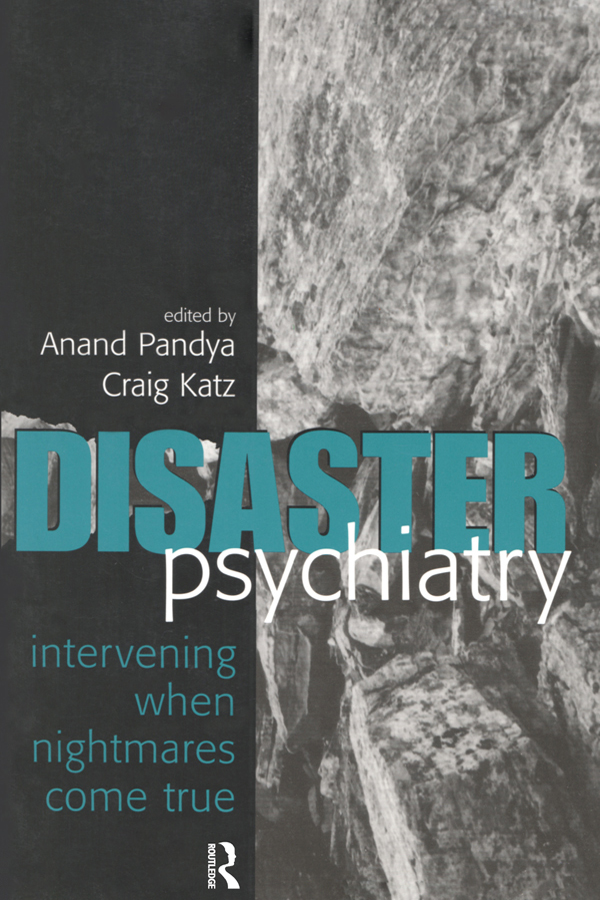 Disaster Psychiatry: Intervening When Nightmares Come True captures the state of disaster psychiatry in the aftermath of the terrorist attacks of September 11, 2001. This emergent psychiatric specialty, which is increasingly separated from trauma and grief psychiatry on one hand and military psychiatry on the other, provides psychotherapeutic assistance to victims during, and in the weeks and months following, major disasters. As such, disaster psychiatrists must operate in the widely varying locales in which natural and man-made disasters occur, and they must establish their role among the chaotic array of organizations involved in direct disaster response.

Editors Anand Pandya and Craig Katz have captured the challenge and promise of disaster psychiatry through first-person narratives. We hear from psychiatrists who have encountered disasters at various stages of their career and in widely varying social, political, and personal contexts. Accounts of psychiatric involvement with adults and children during and after 9/11 have understandable pride of place in this collection. But they are balanced by richly informative narratives about other domestic and international disasters.

Fraught with the drama attendant to the events they describe, these essays delineate the dizzying array of challenges that confront the disaster psychiatrist. They range from the intense emotional responses that are part of the aftermath of any disaster, to the need to legitimize a psychiatric presence within diverse cultural and medical contexts, to the subtle task of providing therapeutic boundaries at a time when all rules seem to be suspended. Special attention is given to the daunting task of working with children whose parents' are disaster victims. What emerges from these testimonies is compelling documentation of skilled and compassionate psychiatrists at the outer limits of their specialty, pursuing their calling into uncharted realms of therapeutic engagement.

"Disaster Psychiatry provides a unique opportunity to witness psychiatrists using a range of skills to help others in nontraditional and flexible ways. The experience of contending with one's own feelings in the midst of staggering crisis and of simultaneously drawing on one's therapeutic skills to provide help in radically unfamiliar settings -- this is the stuff of remarkable stories. In the end, the basic talent of the psychiatrists who tell these stories, their humanity, and their compassionate creativity in devising ways to help disaster victims make for compelling presentations. This book will be an invaluable learning experience for all mental health professionals willing to embrace the enormous challenges of helping others at those critical moments 'when nightmares come true."

"This volume is an invaluable tutorial in disaster psychiatry that should be required reading for all psychiatrists. Remarkably, most psychiatrists have had little formal training in disaster work. Drawing valuably on their unique experiences in New York, Pandya and Katz have assembled a moving selection of firsthand experiences, interwoven with authoritative information about how psychiatrists can help when disaster strikes."

3. The Other Ground Zero

4. September 11 in the ER: Brief Disaster Intervention and Compassion Stress

5. Defining the Psychiatrist's Role with Heroes and Tragedies

7. Professional and Personal Reactions to September 11, 2001

9. Disaster Pschiatry Throughout the Americas

10. All They Can Do Is Kill Me: Psychiatry in the Gaza Strip

11. The Acute Aftermath of an Earthquake in El Salvador

12. Earthquake in Gujarat, India: The Influence of Culture and Resources on Coping with a Natural Disaster

14. Becoming a Disaster Psychiatrist in Turkey

15. Awakening Creativity in the Wake of Disaster: A Psychiatrist's Journey with the People of El Salvador

16. The World Trace Center Disaster and the Setting Up of Kid's COrner

17. Working with Fatherless Children After September 11, 2001

18. Debriefings in Kansas and Oklahome

19. Upheaval of the Stars: From Happy Land to the World Trade Center

20. Vietnam and the World Trade Center: One Psychiatrist's View of Defining Disaster and Working with Its Victims

Anand A. Pandya, M.D. graduated from Harvard College with Honors in Mathematics and Philosophy and received his medical degree from New York University School of Medicine. Dr. Pandya received his general psychiatric training from Columbia University and forensic psychiatric training at New York University. Cofounder of Disaster Psychiatry Outreach, Dr. Pandya runs the ADEPT Program at Bellevue Hospital and is a member of the Department of Psychiatry of New York University School of Medicine. He is active in the American Psychiatric Association and serves on the board of directors of the National Alliance for the Mentally ill. Craig L. Katz, M.D. graduated from Harvard College and received his medical degree from Columbia University. He completed a psychiatry residency at Columbia University and a fellowship in forensic psychiatry at New York University. Dr. Katz is Director of Acute Care Psychiatry Services and Clinical Assistant Professor of Psychiatry at Mount Sinai School of Medicine in New York City. Cofounder and President of Disaster Psychiatry Outreach, he has most recently directed the World Trade Center Mental Health Screening and Intervention Programs that address the mental health needs of Ground Zero workers and volunteers. Dr. Katz serves as cochair of the American Psychiatric Association's New York County District Branch Committee on Disaster, is a member of the advisory panel of the Aircraft Casualty and Emotional Support Services, and is a contributor to the Committee on Terrorism of the Group for the Advancement of Psychiatry.