Discipline in the Global Economy?
International Finance and the End of Liberalism 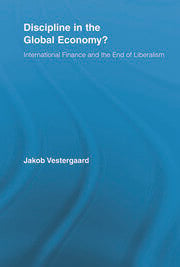 Discipline in the Global Economy?: International Finance and the End of Liberalism

In Discipline in the Global Economy, Jakob Vestergaard investigates the currently prevailing regulation of international finance, launched in response to the financial crises of the 1990’s. At the core of this approach is a set of standards of ‘best practice’, ranging from banking supervision to corporate governance. Vestergaard argues that although these standards are presented as ‘international’, they comprise a norm for the ‘proper’ organization and regulation of economies which is intimately related to the Anglo-American model of capitalism. With this approach to the regulation of international finance, previous deregulation policies were replaced by a comprehensive system for the global disciplining of economies. This is a remarkable, if not paradoxical, occurrence in what is allegedly the heyday of neoliberalism and ‘free market economy’. Moreover, this mode of international financial regulation has proved ineffective, if not counter-productive, in terms of its objective to enhance the stability and resilience of the international financial system. Only by abandoning ‘laissez-fairy tales’ about liberalism may we begin to understand our present predicament– and open a space for critical thinking on modes of international economic governance that are at the same time more conducive to financial stability and more in line with the ethos of liberalism.

1. Introduction  Part I: The Asian Crisis  2. Toward a Problematization of The Asian Crisis  3. Understanding Asia’s Crisis  4. What Happened to Asia?  5. The East Asia Crisis – How IMF Policies Brought the World to the Verge of a Global Meltdown  6. The Asian Debt- and Development Crisis of 1997-?: Causes and Consequences  7. Two To Tango?  Part II: Discipline in the Global Economy  8. Strengthening the International Financial Architecture  9. Michel Foucault’s Analysis of Disciplinary Power  10. Disciplining Economies  11. So What is ‘Proper’ Economy?  12. More Heat Than Light – Anatomy of a Regulatory Failure  13. The Post-Washington Consensus  Part III: The End of Liberalism?  14. What is Liberalism?  15. Liberalism – The Invention of ‘The Economy’  16. Neoliberalism – Governing Through Markets  17. So is it the End of Liberalism?  Part IV: A Way Forward  18. A New Regulation of International Finance

Jakob Vestergaard has an M.Sc. in Economics (University of Copenhagen) and PhD in International Political Economy (Copenhagen Business School). Before taking up his current position as Project Researcher at the Danish Institute of International Studies (DIIS), he was ESRC Post Doctorial Fellow at the London School of Economics and Political Science (LSE) and Assistant Professor at the Copenhagen Business School.

"It would be difficult to find an analysis that is more critical of the dominance of the Washington Consensus in the construction of the international financial system than is Vestergaard's... (His) analysis of the failure of the IFA leads to a series of prescriptions for the regulation of international finance. Recommended."

"A refreshing perspective on international finance that will be of major value to those of us interested in finance and the global development of capitalism."

"This book could scarcely be more pertinent … Discipline in the Global Economy? is a fascinating and original guide."

"[This book] provides a telling indictment of the way international financial regulation was high-jacked by a particularly virulent form of market fundamentalism which, as we have all come to recognize at our cost, has now proved a disaster."