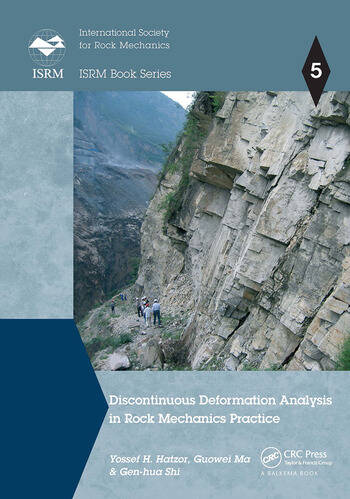 The numerical, discrete element, Discontinuous Deformation Analysis (DDA) method was developed by Dr. Gen-hua Shi while he was working at the University of California, Berkeley, under the supervision of Prof. Richard E. Goodman in the late 1980s. Two-dimensional DDA was published in 1993 and three-dimensional DDA in 2001. Since its publication DDA has been verified, validated and applied in numerous studies worldwide and is now considered a powerful and robust method to address both static and dynamic engineering problems in discontinuous rock masses.
In this book Yossef H. Hatzor and Guowei Ma, co-chairs of the International Society for Rock Mechanics (ISRM) Commission on DDA, join Dr. Shi in authoring a monograph that presents the state of the art in DDA research. A comprehensive discussion of DDA development since its publication is provided in Chapter 1, followed by concise reviews of 2D and 3D DDA in chapters 2 and 3. Procedures to select geological and numerical input parameters for DDA are discussed in Chapter 4, and DDA validation and verification is presented in Chapter 5. Applications of DDA in underground and rock slope engineering projects are discussed in chapters 6 and 7. In Chapter 8 the novel contact theory recently developed by Dr. Shi is published in its complete form, for the first time.
This book is published within the framework of the ISRM Book Series and is the contribution of the ISRM DDA Commission to the international rock mechanics community.

Professor Yossef H. Hatzor is currently Lemkin Chair Professor of Rock Mechanics, Department of Geological and Environmental Sciences, the director of the engineering geology program and of the rock mechanics laboratory at Ben-Gurion University of the Negev, Israel. His research focuses on the development, verification, validation, and application of Block Theory, the numerical Discontinuous Deformation Analysis, and the Numerical Manifold Method, by developing analytical solutions that can be used as a basis for code verification, conducting laboratory experiments that can be used for code validation, and monitoring rock mass deformation in the field for addressing key rock mechanics issues. Professor Hatzor is involved in major geotechnical engineering projects in Israel, including dynamic stability analysis and reinforcement design of the Masada world heritage site.
Yossef is the founding president of Israel Rock Mechanics Association, an ISRM national group, and served as IRMA president between 2003 and 2014. In 2007 he was appointed as Chair Professor in Rock Mechanics by BGU Senate. In 2011 he won the competitive visiting professorship appointment for senior international scientists by the Chinese Academy of Sciences and he holds this position at the Rock and Soil Mechanics Institute of the CAS in Wuhan, where he collaborates with colleagues from the National Key Laboratory of Geomechanics and Geotechnical Engineering on projects involving deep tunnels in various geological conditions in China. Yossef is co-chair of the ISRM DDA Commission. He is the recipient of several national and international research awards and is a member of the editorial boards of both the International Journal of Rock Mechanics and Mining Sciences, and Rock Mechanics and Rock Engineering.

Prof Guowei Ma obtained his BSc from Beijing University in 1989, MEng from Xi’an Jiaotong University in 1992, PhD from Nanyang Technological University, Singapore in 2000. He worked subsequently in Xi’an Jiaotong University/China, Iwate University/Japan, University of Delaware/USA, Nanyang Technological University (NTU)/Singapore and the University of Western Australia (UWA)/Australia. He had been the Secretary General of the Society of Rock Mechanics & Engineering Geology (Singapore) and the Secretary General of the Association of Computational Mechanics (Singapore). He is currently the President of the Western Australia Chinese Scientists Association (WACSA). Guowei’s research interests include rock dynamics, analysis of discontinuous deformation, dynamic constitutive models of materials and protective structures. He is also the Associate Editor of International Journal of Protective Structures, and an Editorial Board Member of 6 other international journals. He co-authored 2 books published by Springer, edited 2 conference proceedings and 3 special issues of international journals. He authored over 300 peer reviewed international journal and conference papers.

Dr. Genhua Shi, acknowledged as a professional consultant in rock and structural engineering, is the chairman of the DDA Company in California, USA, and the chief scientist of the Discontinuous Deformation Analysis Laboratory, Yangtze River Scientific Research Institute. He obtained his BSc and MEng from Beijing University, China respectively in 1963 and 1968, and his PhD from University of California at Berkeley, USA in 1988. He has put forward the Key Block theory and Discontinuous Deformation Analysis method, now widely studied and applied in rock mechanics and rock engineering fields worldwide. He is also the inventor of the Numerical Manifold Method, which is a novel method for the analysis of both continuous and discontinuous material behaviors. He has been actively involved in many worldly famous projects related to rock mechanics in-situ tests, nuclear waste storage, blasting design of rock engineering, stability analysis of rock slopes and rock foundations, underground excavation support design and construction, and dam design and dam foundation analysis. His papers have appeared in profound journals, and in significant conferences such as the series of North American Rock Mechanics Symposiums, and the series of Conferences on Analysis of Discontinuous Deformation. Genhua is the recipient of the China Natural Science Award and other international awards. He resides in Belmont, California, USA.

"This book brings the extraordinary power of DDA (Discontinuous Deformation Analysis) to the tool-baskets of engineers who are responsible for excavations and foundations in jointed and faulted rock masses. The mathematical basis for DDA originated in the brilliant PhD Dissertation and subsequent publications of Gen-hua Shi, and has been furthered by many applications in recent years. These include Professor Hatzor’s resourceful analyses of works needed to protect ancient surficial and underground structures in Israel. Important developments have been published in the proceedings of the International Assoc. for Computer Methods and Advances in Geomechanics, and in other recent engineering literature. With this book, the potential applications of DDA will be further recognized and applied for the benefit of the entire engineering community."