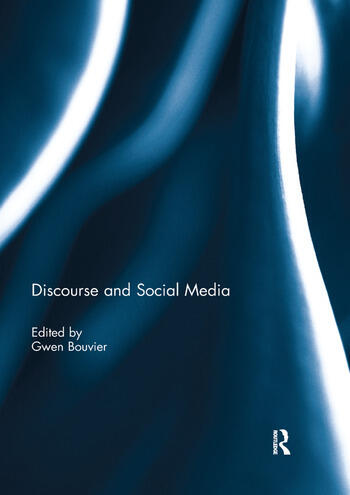 Discourse and Social Media is a unique and timely collection that breaks ground on how discourse scholars, coming from a range of disciplinary perspectives, can critically analyse different social media, including YouTube, Facebook, Twitter, and News. The book fills a gap in the market for a multi-disciplinary collection for analysing the discourse of social media.

In providing a thorough review of the field to date, the opening chapter considers some of the common and divergent interests and priorities that exist in social media discourse analysis. It also discusses the wider methodological and theoretical implications which social media analysis brings to the process of discourse analysis, as new forms of connections and communication call us to re-think the static models that we have been using. The rest of the collection draws on different traditions in discourse studies, including Critical Discourse Analysis, Sociolinguistics, Pragmatics, Foucaultian analysis and Multimodality, to bring several unique approaches to critically analysing social media from a discourse perspective. Each ground-breaking chapter shows how different forms of social media data can best be selected, analysed, and dealt with critically.

As a whole, Discourse and Social Media provides a go-to resource for social media scholars, as well as graduate students. The book is a significant contribution to the development of the field at this present shifting time. This book was originally published as a special issue of the Journal of Multicultural Discourses.

2. The pursuit of power in Iraqi political discourse: unpacking the construction of sociopolitical communities on Facebook Thulfiqar H. Al-Tahmazi

3. YouTube as a site of debate through populist politics: the case of a Turkish protest pop video Lyndon C. S. Way

4. ‘Should each of us take over the role as watcher?’ Attitudes on Twitter towards the 2014 Norwegian terror alert Joel Rasmussen

5. Radicalist discourse: a study of the stances of Nigeria’s Boko Haram and Somalia’s Al Shabaab on Twitter Innocent Chiluwa

Gwen Bouvier is Assistant Professor in Social Media at Zayed University, Abu Dhabi, UAE. Her main areas of research interest are social media, the Middle East region, and news representation. Her recent publications have focused on 9/11 and representation, discourse analysis, social media, and the visual (mis)representation of crises in news.