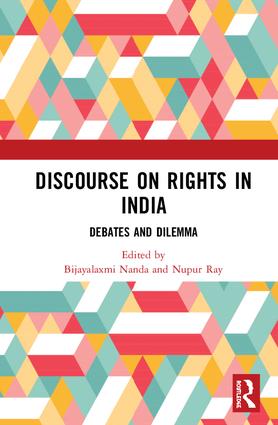 Discourse on Rights in India

This book is a compelling examination of the theoretical discourse on rights and its relationship with ideas, institutions and practices in the Indian context. By engaging with the crucial categories of class, caste, gender, region and religion, it draws attention to the contradictions and contestations in the arena of rights and entitlements. The essays by eminent experts provide deep and nuanced insights on the intersecting issues and concerns of individual and group identities as well as their connection with the State along with its multifarious institutions and practices. The volume not only engages with the dilemmas emerging out of the rights discourse, but also sets out to recognize the significance of a shared commitment to a rights-based framework towards the promotion of justice and democracy in society.

The book will be useful to academics, social scientists, researchers and policymakers. It will be of special interest to teachers and students in the fields of politics, development studies, philosophy, ethics, sociology, gender/women’s studies and social movements.

‘Not only does this study engage with the rights discourse on its broader theoretical terrain but it also carries a particular relevance for an India whose unmatched diversity of cross-cutting identities poses distinctive problems that need to be addressed if we are to move towards a more humane and democratic order.’

‘This book takes an in-depth and a contemporaneous look at some of these vexed dilemmas to provide us the much-needed clarity on how best can the framing of rights through the discourse of intersectionality can reconcile these insurmountable tensions.’

‘In these times when human rights are in peculiar jeopardy, this book brings the dilemma of rights in the centre stage of discourse and debates by theorising the issues, examining the contestations and critiquing the state. Nothing could be as timely as this erudite work of high academic intensity.’

Introduction: Discourse on Rights in India: Debates and Dilemmas

Dimensions of Power and Social Transformation

Gender, Rights and the Justice Gap: Going Beyond the Politics of Difference

What can Human Rights add to the Fight against Corruption? Some Lessons from India

Bodily Rights and Agency: Looking at the Rights Discourse of Women in Prostitution

Women in Politics and the Subject of Representations

Women and Disability: Issues of Care

Part III: The ‘Myth’ of Conflicting Rights: A Critique of the Indian State

The ‘Right’ Music: Caste and ‘Classical’ Music in South India

The Trajectories of Work, Sexuality and Citizenship: The Rights of the Transgender in India

People and the Terrains: PESA Reconsidered

Beyond Conclusions: Discourse on Rights in India: A Case for Reflective Autonomy

Bijayalaxmi Nanda is Associate Professor, Department of Political Science, Miranda House, University of Delhi, India. Her areas of specialisation include political theory, feminist politics and human rights. She has been conferred the Teacher’s Excellence Award (2017) by the University of Delhi. She is actively involved with campaigns for the rights of girl child and women in India for past two decades. Her publications include Sex-Selective Abortion and the State: Politics, Laws and Institutions in India (2018), Human Rights, Gender and Environment (co-authored, 2007),and Understanding Social Inequality: Concerns of Human Rights, Gender and Environment (co-edited, 2010).She has also contributed chapters to edited volumes, and has written extensively on issues of gender discrimination, girl-child rights, health and education policies, human development and human rights.

is Assistant Professor, Department of Political Science, Kamala Nehru College, University of Delhi, India. Her areas of interest include political philosophy, feminist politics and political theory. She is associated with campaigns to counter violence against women in India. She has written extensively on the rights discourse and has published ‘Exploring "Empowerment" and "Agency" in Ronald Dworkin’s Theory of Rights: A Study of Women’s Abortion Rights in India’ in the Indian Journal of Gender Studies (2014). She has contributed chapters to edited volumes and presented papers at various national and international conferences.