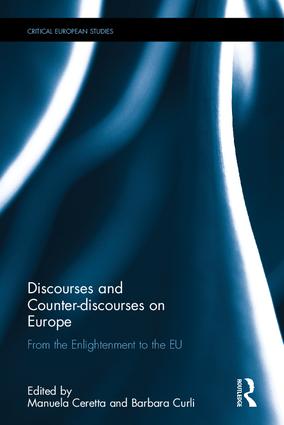 Discourses and Counter-discourses on Europe

From the Enlightenment to the EU, 1st Edition

The European Union plays an increasingly central role in global relations from migration to trade to institutional financial solvency. The formation and continuation of these relations – their narratives and discourses - are rooted in social, political, and economic historical relations emerging at the founding of European states and then substantially augmented in the Post-WWII era. Any rethinking of our European narratives requires a contextualized analysis of the formation of hegemonic discourses.

The book contributes to the ongoing process of "rethinking" the European project, identity, and institutions, brought about by the end of the Cold war and the current economic and political crisis. Starting from the principle that the present European crisis goes hand in hand with the crisis of its hegemonic discourse, the aim of the volume is to rescue the complexity, the richness, the ambiguity of the discourses on Europe as opposed to the present simplification. The multidisciplinary approach and the long-term perspective permits illuminating scope over multiple discourses, historical periods, and different "languages", including that of the European institutions.

This text will be of key interest to scholars and students of European Union politics, European integration, European History, and more broadly international relations.

Introduction: Rescuing Europe from its Rhetoric

Part I: Thinking and Regretting Europe

1. Thinking Europe in the Age of Enlightenment: philosophes and antiphilosophes between Universalism andFragmentation

2. Evoking Europe against the French Revolution: the Rhetorical Tools of Counter-revolutionary Thinkers

3. Discourses on Europe and their Political Value in Restoration France

Part II: The Burden of Rhetoric: inside the European Institutions

4. A European Framework for Military Institutions? International Integration and European Perspectives in Military Rhetorics after the Second World War

6. Parliamentary Groups and Political Traditions in the Debates on EU Institutional Reform (1979-1999)

7. The Political Groups of the European Parliament in the Face of Yugoslavia's Disintegration and the Discursive Framing of EU Foreign Policy (1991-1995)

8. The Alter-globalist Counter-discourse in European Rhetoric and Translation: Women’s Rights at the European Parliament

9. Europe in the Media Space: The Construction of the EU Public Sphere in Italy

10. ISIS’ Dabiq Communicative Strategies, NATO and Europe: Who is Learning from Whom?

11. Changing Perceptions of the European Union in the MENA Region before and after the Arab Uprisings: the Case of Tunisia

Manuela Ceretta is Professor of History of Political Thought at the University of Turin, Italy. She is a member of the Scientific Board of Studi Irlandesi, A Journal of Irish Studies and of the Editorial Board of Storia del Pensiero politico.

European Studies as a field of academic inquiry is often conflated with European Union Studies. The result is that many significant trends, processes, and events pertaining to Europe as a whole are not given adequate critical analysis. The Critical European Studies Series aims at filling this gap. Critical European Studies will have a strong grounding in many fields of research in its effort to introduce critical analyses to the study of Europe and the EU that shall be rooted in a broad spectrum of theoretical perspectives. Approaches based upon historiographical, sociological, linguistic, anthropological, post-colonial, ethnographic, philosophical, post-structuralist, feminist, etc. perspectives are particularly welcome, since these frameworks only receive sporadic attention. Without putting into question the value of specific policy approaches, although individual studies in the series might undertake this task, the Critical European Studies book series attempts to bring together alternative approaches to critical analyses of European politics (including European Union politics), while overcoming disciplinary borders and paradigms. Behind this scholarly enterprise stands an enthusiastic embrace of the project and accomplishments of the European Union, but we perceive the EU and European Union Studies in need to consider many different critical correctives of its political ideas and ideals.