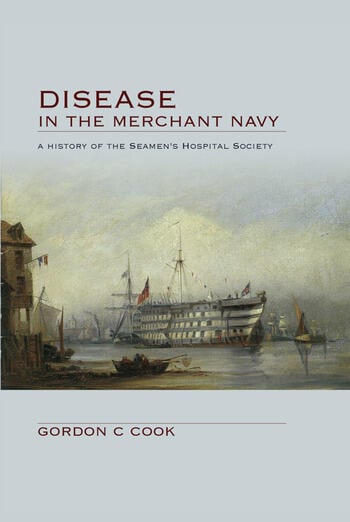 Disease in the Merchant Navy: A History of the Seamen's Hospital Society

Contents: Part I: Beginnings (1817-1821). Social conditions and disease prevention in early nineteenth century Britain. Britain's major maritime organisations, shipyards, and London's docks. Conditions of service in the mercantile organisations. Diseases afflicting sailors before 1821. The SHS's precursor: early meetings aimed at London's homeless: 'Most of the destitutes seem to be sailors'. 'This laudable institution': the permanent society is launched in 1821. Part II: The days of the hospital-ships (1821-1870). John Lydekker (1778-1832): a benefaction leading to the Act of Incorporation, and other fund-raising initiatives. The hospital-ships. Conditions of service on the hospital-ships. Fundraising in the days of the ships. Diseases on the hospital-ships. Administrators, physicians and surgeons who served during the ship era. Part III: The SHS in 'full swing' (1870-1939). Transfer of facilities to the infirmary of the Royal Hospital, Greenwich - in 1870. Expansion of facilities - at the Dreadnought, and further afield. The society's expanding staff - 1870-1914. Diseases encountered by the Society 1870-1914. Nursing and nurse-training at the Dreadnought and AHD: establishment of a school on Nightingale lines. Genesis of the first school for tropical diseases - at the ADH. The London School of Clinical Medicine (1906-14), and structural changes to the Dreadnought Hospital. Part IV: (1914-2006) Two world wars, introduction of the National Health Service, and insidious decline of the society. The Great War (1914-18); the inter-war years; and several new facilities. Staffing during the Great War and inter-war years. The Second World War (1939-45): introduction of the National Health Service (1948); and decline in the Society's activities. Disease(s) at the society's hospitals in the latter years of the twentieth century. The society's staff in recent times. The society (and its tropical medicine component) in the late twentieth and twenty-first centuries.