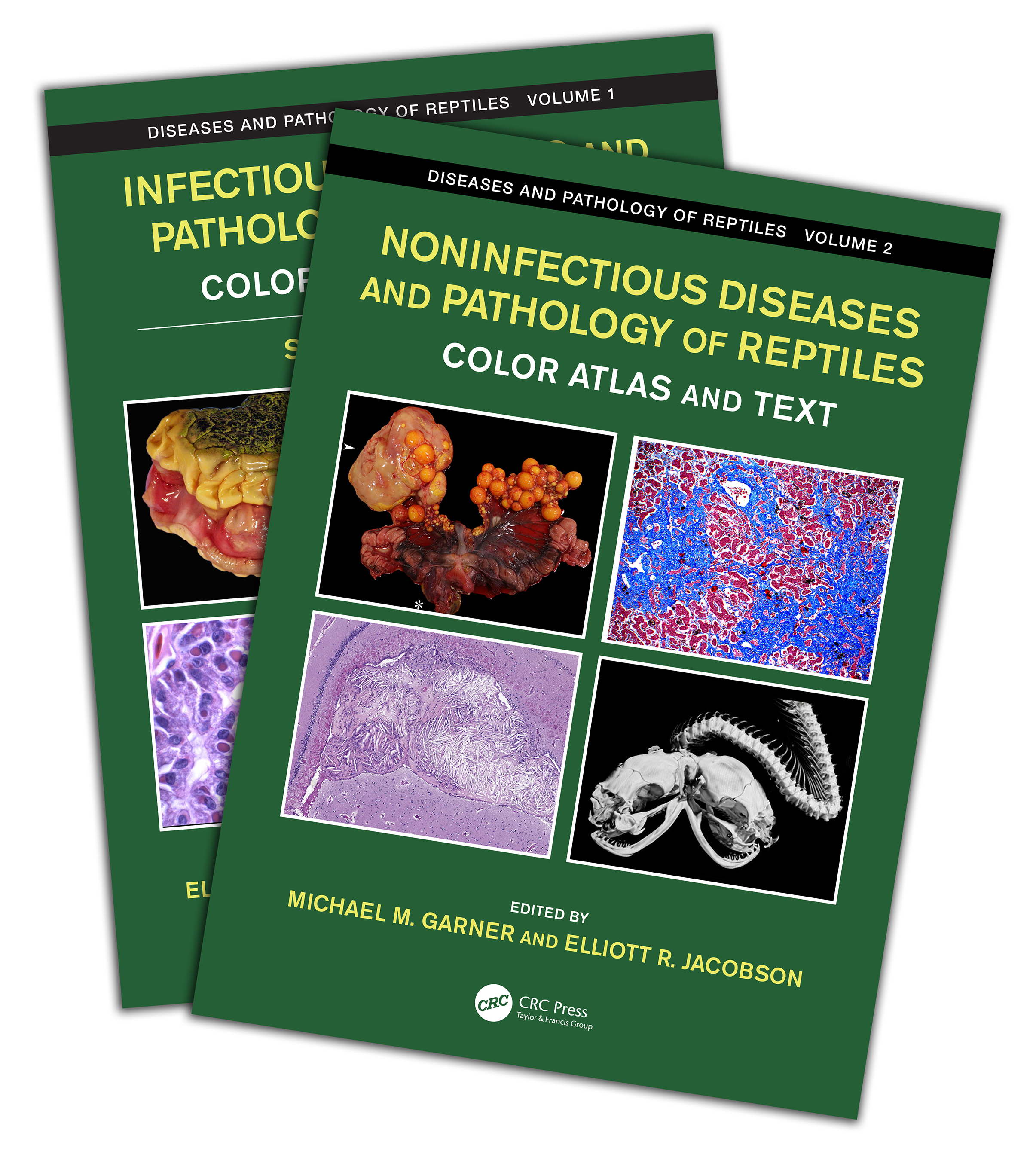 Diseases and Pathology of Reptiles

This two-volume set represents a second edition of the original Infectious Diseases and Pathology of Reptiles alongside a new bookthat covers noninfectious diseases of reptiles. Together, these meet the need for an entirely comprehensive, authoritative single-source reference. The volumes feature color photos of normal anatomy and histology, as well as gross, light, and electron microscopic images of infectious and noninfectious diseases of reptiles. The most detailed and highly-illustrated reference on the market, this two-volume set includes definitive information on every aspect of the anatomy, pathophysiology, and differential diagnosis of infectious and noninfectious diseases affecting reptiles.

This two volume set, Diseases and Pathology of Reptiles: Color Atlas and Text, takes the understanding of reptilian diagnostics to a new level. Never has a book covered Biology, Diagnostics, Infectious and Noninfectious Diseases in such a comprehensive, in depth approach. Whether studying for advanced certification, needing information for research or investigating clinical cases, this publication is a must have.

Elliott Jacobson and Michael Garner…these two legends in reptile biology, disease, and medicine have at long last come together to produce a two-volume reference that is not only unparalleled in its depth and the combined experience of its editors and contributing authors, but is also an absolute must-have for anyone interested in any aspect of herpetological science and medicine.

Pathologists have always been central to herpetological medicine and surgery. Originally because they were the only ones that actually knew what was going on…although admittedly following death and necropsy. I remember John Cooper telling me that Edward Elkan (a notable father of reptile pathology) would refuse to have anything to do with a sick reptile until after it had died. Times have changed and with increasing ante-mortem diagnostics, we are so much better at diagnosing and treating this group of vertebrates. However, the importance of the pathologist has never been greater, and the complexity of their discipline continues to increase. There has to be a symbiotic relationship between clinician and pathologist. These books will be a pillar for the specialty, and essential to both clinicians and pathologist alike.

Elliott R. Jacobson, DVM, PhD, DACZM was born in Brooklyn, NY. He attended Brooklyn College of the City University of New York, and in 1967 he earned his BS degree in Biology. Next, he earned a M.S. Degree at New Mexico State University in 1969 working on physiological ecology of snakes. He enrolled in graduate school and veterinary school at the University of Missouri and earned his DVM and PhD in Zoology in 1975. He was a wildlife veterinarian for the state of Maryland from 1975 to 1977. He arrived in the College of Veterinary Medicine, University of Florida in 1977, where he was a resident in Wildlife and Laboratory Animal Medicine. In 1979 he was appointed Assistant Professor and helped develop the Zoological Medicine Service. In 1986 he became a Diplomate of the American College of Zoological Medicine. . He moved up through the ranks of full professor in 1989. During his career he advised 31 residents and advised or served on the committee of 18 graduate students. Over the last 41 years he has worked on health problems of a wide variety of amphibians, reptiles, birds, and mammals. His former laboratory specialized in infectious diseases of reptiles including the development of serologic assays and molecular diagnostic assays used to determine exposure to and infection with certain pathogens. He has authored or coauthored 283 refereed scientific papers, 46 chapters in texts, edited and co-edited four books, and has been either the principal or co-principal investigator on 83 funded projects since 1978. He retired from the University of Florida in 2012 and is Professor Emeritus of Zoological Medicine. since June/July, 2013 he has co-taught a course titled "Conservation Medicine and Diseases of Herpetofauna" at the American Museum of Natural History Southwest Research Station, Portal, Arizona. This has resulted in a full circle experience for him since first visiting this field station in 1967 when he was a graduate student at New Mexico State University. He is currently consulting on a project in Belize involving captive breeding of the Hicatee (Dermatemys mawii).

is a renowned veterinary pathologist who specializes in zoological and wildlife diseases. In 1994, Dr. Garner founded the consulting firm, Northwest ZooPath. Since that time he has worked with numerous zoos, wildlife centers, universities, and veterinary clinics in the United States and abroad. He has authored or co-authored more than 200 papers and book chapters. Dr. Garner is also an enthusiastic teacher and is committed to training veterinary pathologists and residents. He established an outreach training program for foreign pathologists in 1999, and currently has housed and trained 22 externs and residents. A sought after speaker, Dr. Garner has given hundreds of presentations and seminars at national and international meetings and veterinary colleges, including Washington State University where he has held an adjunct faculty appointment since 1998.