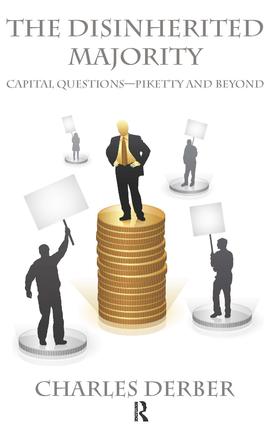 Capital Questions-Piketty and Beyond, 1st Edition

Thomas Piketty's blockbuster 2014 book, Capital in the 21st Century, may prove to be a game-changer, one of those rare books such as Friedan's The Feminine Mystique, which helped spark a new feminist movement. The world-wide flood of commentary suggests Piketty's book has already opened a new conversation not only about inequality, but about class, capitalism and social justice. Inherited wealth is at the heart of Capital in the 21st Century, and Derber shows how the 'disinherited majority' is likely to affect the future. In his new book, Derber shows that there are actually 'two Pikettys' - different voices of the author on the 1%, inheritance, and capitalism itself - that create a fascinating and unacknowledged hidden debate and conversation within the book. Drawing on Piketty's discussion, Derber raises fourteen 'capital questions' - with new perspectives on caste and class warfare, the Great Recession, the decline of the American Dream and the Occupy movement - that can guide a new conversation about the past and future of capitalism. The Disinherited Majority will catalyse a conversation beyond Piketty already emerging in colleges and universities, town halls, coffee shops, workplaces and political parties and social movements; an essential class for all Americans.

“In The Disinherited Majority, Charles Derber insightfully picks up where Thomas Piketty leaves off, making clear that the stubborn inequality of capitalism is not just a mechanical process but one that must be understood socially and politically.”

"This book carries forward in an accessible and highly informative way "the new global conversation about money and morality in a troubled capitalist world" provoked by Thomas Piketty's important and influential study. Issues of prime importance are addressed. The book succeeds admirably in its aim of drawing anyone who is concerned with the deep and often painful problems of contemporary society into this conversation as an active participant, a necessary precondition for any hope for a more democratic and just future."

"A brilliant, provocative, and illuminating engagement. Derber shows where and how Piketty's flawed masterpiece can help spark and shape an urgently required new popular movement for social justice and democracy in the United States."

—Paul Street, Author of They Rule: The 1% vs. Democracy

“This book is stunning in the scope of ideas it covers in a concise but deep and rich manner. Readers, including students studying economics, political science, sociology, history, business, public policy, public health and social justice, will dig into this book with great intrigue and excitement. My students will find this book an exciting platform from which to intensely debate the vast inequalities of wealth and power in today’s world, and to equally intensely seek solutions.”

—Jonathan White, Author of The Engaged Sociologist: Connecting the Classroom to the Community

1 The Piketty Phenomenon 2 What's the Matter with Economics? 3 Economics with Class 4 True Class 5 Caste and Class 6 The Problem with Markets 7 Extreme Inequality and the Einstein Formula 8 The Death of Meritocracy 9 The Future of the American Dream 10 Wealth and War 11 The Climate of Capitalism 12 Capitalism vs. Democracy 13 The Social State and Economic Democracy 14 The New Politics