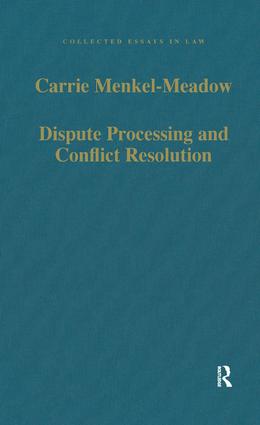 This insightful volume is essential for a clearer understanding of dispute resolution. After examining the historical and intellectual foundations of dispute processing, Carrie Menkel-Meadow turns her attention to the future of conflict resolution.

'Carrie Menkel-Meadow is a prolific and perceptive scholar in the conflict resolution field. This collection of her ADR writings makes a fitting companion to her earlier volume on mediation.' Professor Frank E.A. Sander, Harvard University, USA 'In this collection of stimulating essays, Carrie Menkel-Meadow vividly demonstrates a remarkable power of synthesis and an ability to explore negotiation and dispute resolution as a legal academic who is at once a clinician, a feminist, and a scholar with a broad range [of] interdisciplinary knowledge.' Professor Robert H. Mnookin, Harvard Law School, USA

Contents: Introduction. History and Theoretical Forebears: The Purposes and Sources of Process Pluralism: Mothers and fathers of invention; the intellectual founders of ADR; Legal negotiation: a study of strategies in search of a theory. Foundational Processes of Dispute Resolution: Toward another view of legal negotiation: the structure of problem solving; The many ways of mediation: the transformation of traditions, ideologies, paradigms and practices. Uses and Abuses of Dispute Resolution Processes: For and against settlement: uses and abuses of the mandatory settlement conference; Pursuing settlement in an adversary culture: a tale of innovation co-opted or 'the law of ADR'; Lawyer negotiations: theories and realities - what we learn from mediation. Conflicts about Conflict Resolution: Philosophical and Policy Issues in Dispute Resolution: When dispute resolution begets disputes of its own: conflicts among dispute professionals. Ethical Issues in Dispute Processing: Ethics and professionalism in non-adversarial lawyering; Ethics in ADR representation: a road map of critical issues. The Future of Dispute Processing: Creativity, Problem Solving and Complex, Multi-Party Disputes: Aha? Is creativity possible in legal problem solving and teachable in legal education?; When litigation is not the only way: consensus building and mediation as public interest lawyering; Practicing 'In the Interests of Justice' in the 21st century: pursuing peace as justice; Name index.

Each volume in this Collected Essays series brings together a selection of articles by a leading authority on a particular subject. The articles are drawn from a wide range of journals, conference proceedings and books. The collections make readily available the authors' own selections of their most important writings on specific themes, together with an introduction which outlines the context of the work and comments on its significance and potential. The collected essays complement each other to give a retrospective view of the author's achievements and a developmental picture of a subject area. Some volumes include critiques of the author's work which have called for a response and other contain previously unpublished essays on the selected subject.