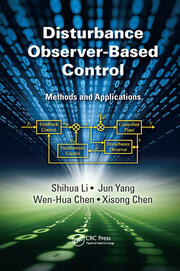 Due to its abilities to compensate disturbances and uncertainties, disturbance observer based control (DOBC) is regarded as one of the most promising approaches for disturbance-attenuation. One of the first books on DOBC, Disturbance Observer Based Control: Methods and Applications presents novel theory results as well as best practices for applications in motion and process control that have already benefited numerous organizations.

Filled with valuable insights gathered over decades of research by the authors, this book provides time- and stress-saving guidance for anyone interested in the theory and method research of DOBC. Using typical engineering examples, the text provides readers with an understanding of recent developments in DOBC as well as the tools required to make the most of this promising approach to disturbance-attenuation.

Shihua Li was born in Pingxiang, Jiangxi Province, China in 1975. He received his bachelor, master, and Ph.D. degrees all in Automatic Control from Southeast University, Nanjing, China in 1995, 1998 and 2001, respectively. Since 2001, he has been with School of Automation, Southeast University, where he is currently a professor. His main research interests include nonlinear control theory with applications to robots, spacecraft, AC motors and other mechanical systems. He’s senior member of IEEE, published over 100 academic papers in journals including Automatica, IEEE Transactions on Automatic Control, IEEE Transactions on Industrial Electronics, International Journal of Systems Science, International Journal of Control, Aerospace Science and Technology, etc..

Jun Yang received his B.S. degree in the Department of Automatic Control from Northeastern University, Shenyang, China in 2006. In 2011, he received the Ph.D. degree in control theory and control engineering from School of Automation, Southeast University, Nanjing, China, where he is currently a lecturer. His research interests include disturbance estimation and compensation, advanced control theory and its application to flight control systems, motion control systems and process control systems.

Wen-Hua Chen received his M.S. and Ph.D. degrees from Department of Automatic Control at Northeast University, China, in 1989 and 1991, respectively. From 1991 to 1996, he was a lecturer in Department of Automatic Control at Nanjing University of Aeronautics and Astronautics, China. He held a research position and then a lectureship in control engineering in Centre for Systems and Control at University of Glasgow, UK, from 1997 to 2000. He currently holds a senior lectureship in flight control systems in Department of Aeronautical and Automotive Engineering at Loughborough University, UK. He has published more than 100 articles in journals and conferences. His research interests include the development of advanced control strategies and their applications in aerospace engineering.

Xisong Chen received his B.S. degrees from School of Electronic Science and Engineering at Jilin University, China, in 1992. He received his M.S. and Ph.D. degrees from School of Automation at Southeast University, in 2002 and 2009, respectively. Since 2002, he has been with School of Automation, Southeast University, where he is currently a professor. His research interests include advanced control strategies, disturbance attenuation methods and their applications in process control engineering.