Divided We Fall
Family Discord and the Fracturing of America 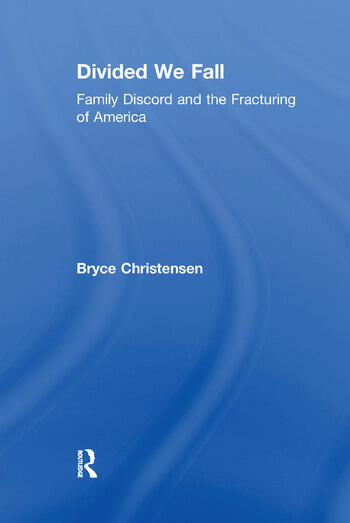 Divided We Fall: Family Discord and the Fracturing of America

In the weeks that followed the horror of September 11, politicians of both major parties resolutely asserted America's national unity. Barely four years later, the illusions of the rhetoric of unity have given way to the divisive oversimplifications of Red vs. Blue electoral cartography. Divided We Fall: Family Discord and the Fracturing of America offers a more nuanced yet more disturbing picture of American disunity, a disunity both social and political, both public and personal. Deeper than the disagreements that separate voter from voter, this disunity increasingly separates man from woman, husband from wife, parent from child, grandparent from grandchild, and sibling from sibling.

Though the national turmoil in family life has unquestionably opened new divides in political life (on the questions of abortion and gay marriage, for instance), this analysis explores the bewildering cross-cutting tensions surrounding these fissures. The search for ways to bridge such fissures takes on particular urgency because of the mounting costs of family disintegration--social and legal, cultural and psychological. Because they recognize the often-desperate plight of single mothers and their children, policymakers have often worked together in bipartisan fashion to intensify government efforts to collect child support from non-custodial fathers, to place abused children in foster care, and to provide shelter for the family fragments on the street.

But these pragmatic government responses to pressing social needs are no substitute for deeper probing into the cultural causes of these needs. Indeed, as the author probes those causes--including the erosion of the home economy, of restraints on sexual conduct, and of the traditional family wage--he warns that continued reliance on government to compensate for family failure will make matters worse in the long run. While family failure puts ever more burdens on government, this investigation shows how such failure withers the selfless civic impulses that sustain any healthy government.