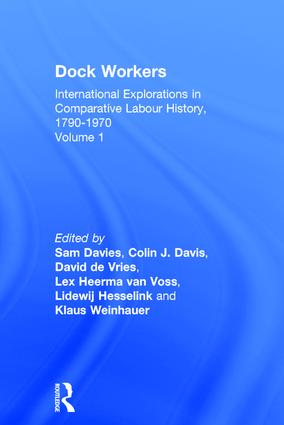 Workers who loaded and unloaded ships have formed a distinctive occupational group over the past two centuries. As trade expanded so the numbers of dock labourers increased and became concentrated in the major ports of the world. This ambitious two-volume project goes beyond existing individual studies of dock workers to develop a genuinely comparative international perspective over a long historical period. Volume 1 contains studies of 22 major ports worldwide. Built around an agreed framework of issues, these 'port studies' examine the type of workers who dominated dock labour, their race, class and ethnicity, the working conditions of dockers and the role of government as employer, arbitrator and supporter. The studies also detail how dockers organized their labour, patterns of strike action and involvement in political organizations. The structure of the port city is also outlined and descriptions given of the waterside environment. These areas of investigation form the basis for a series of 11 thematic studies which comprise Volume 2. Drawing on the information provided in the port studies, these essays identify important aspects and recurring themes, and explain how and why particular cases diverge from the rest. The final chapter of the book synthesizes the various approaches taken to offer a model which suggests several configurations of dock labour and presents suggestions for future research. This major scholarly achievement represents the most sustained attempt to date to provide a comparative international history of dock labour. An annotated bibliography completes this essential reference work.

'… essential reading for anyone with a professional interest in port labour history.' International Journal of Maritime History