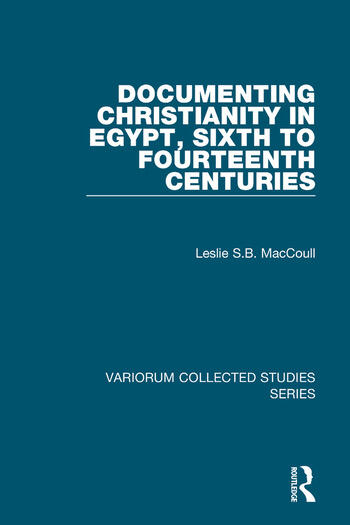 The nineteen studies in this volume, produced over the last fifteen years, cover three areas in Christian Egypt's long and enduring history. First are eight papers dealing with record-keeping in both of the Christian Egyptian culture-carrying languages of late antiquity, Coptic and Greek, showing how these languages were used pragmatically and interactively to embody everyday transactions and messages. Then come five studies of a major sixth-century thinker and theologian, John Philoponus, who contributed greatly to the self-definition of the non-Chalcedonian Egyptian church and employed both classical philosophy and biblical exegesis to provide his fellow Miaphysites with needed intellectual tools. Finally there are six articles ranging from sixth-century philosophy, poetry, and liturgy to the cultural productions of Egyptian Christians living under Muslim rule, including how they sought to memorialize traditions and deal with internal conflict.

Contents: Introduction; Part I Papyri, Coptic and Greek: The Apa Apollos monastery of Pharoou (Aphrodito) and its papyrus archive,; Further notes on interrelated Greek and Coptic documents of the 6th and 7th centuries; Dated and datable Coptic documentary hands before AD 700; Why do we have Coptic documentary papyri before AD 641?; More on documentary Coptic at Aphrodito; P. Lond.Copt. I 1077: taxes in money in 7th-century Egypt; Aspects of Church finance in the 7th-century Hermopolite according to P.Lond.Copt.I 1077; The Bawit contracts: texts and translations. Part II John Philoponus: A new look at the career of John Philoponus; The monophysite angelology of John Philoponus; John Philoponus and the composite nature of Christ; John Philoponus On the Pasch (CPG 7267): the Egyptian eucharist in the 6th century and the Armenian connection; The historical context of John Philoponus' De Opificio Mundi in the culture of Byzantine-Coptic Egypt. Part III Cultural Studies: Late Antiquity and After: Uniformis Trinitas: once more the theopaschite trinitarianism of Discorus of Aphridito; The Anaximander saying in its 6th-century (CE) context; 'A dwelling place of Christ, a healing place of knowledge': the non-Chalcedonian eucharist in late antique Egypt and its setting; The prophecy of Charour; Coptic wisdom poetry: the Solomon complex redux; The rite of the jar: apostasy and reconciliation in the medieval Coptic Orthodox Church; Index.

'This is the second volume by MacCoull to appear in the Variorum Collected Studies Series after the one on Coptic Perspectives on Late Antiquity. The present volue covers a broader period and many more aspects than the purely Coptic. It also shows the breadth of the author’s interests and expertise.' Journal of Eastern Christian Studies