Dogs in the North
Stories of Cooperation and Co-Domestication 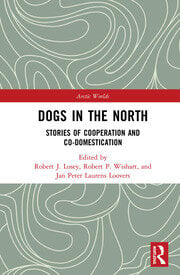 Dogs in the North: Stories of Cooperation and Co-Domestication

Dogs in the North offers an interdisciplinary in-depth consideration of the multiple roles that dogs have played in the North. Spanning the deep history of humans and dogs in the North, the volume examines a variety of contexts in North America and Eurasia. The case studies build on archaeological, ethnohistorical, ethnographic, and anthropological research to illuminate the diversity and similarities in canine–human relationships across this vast region. The book sheds additional light on how dogs figure in the story of domestication, and how they have participated in partnerships with people across time. With contributions from a wide selection of authors, Dogs in the North is aimed at students and scholars of anthropology, archaeology, and history, as well as all those with interests in human–animal studies and northern societies.

3. Hunters in their own right: Perspectival sharing in Soiot hunters and their dogs Alexander C. Oehler

The Archaeology of Human–Dog Relations in Northwest Alaska Erica Hill

An Ethnohistory of Dogs in the Mackenzie Basin (Western Subarctic) Patricia A. McCormack

The Police and Dogs During the Early Patrol Years in the Western Canadian Sub-Arctic: An inter-species colonial cooperation? Robert P. Wishart

Threatening the Fantasy of an Arctic Welfare State: Canada, Quebec and Inuit dogs in Qikiqtaaluk and Nunavik between 1957 and 1968 Francis Lévesque

Dogs among Others: Inughuit companions in northwest Greenland Kirsten Hastrup

Prehistory of Dogs in Fennoscandia: A review Suvi Viranta and Kristiina Mannermaa

“A dog will come and knock at the door, but remember to treat him as a human”: The legend of the dog in Sámi tradition Nuccio Mazzullo

Dogs in Saapmi: From competiton to collaboration to cooperation to now Myrdene Anderson

Robert J. Losey is Associate Professor in the Department of Anthropology at the University of Alberta, Canada. His current research involves the study of humans’ relationships with dogs as evidenced in the archaeology of Eastern Russia.

Robert P. Wishart is Lecturer in the Department of Anthropology at the University of Aberdeen, UK.  His current research involves ethnographic, ethnohistorical, and history of science research focused on colonialism and human–animal relations in the Canadian North.

Jan Peter Laurens Loovers is Research Fellow in the Department of Anthropology at the University of Aberdeen, UK. As part of the ERC Arctic Domus Project, his research concerns the relationships between humans, dogs, fish, and caribou in the Canadian circumpolar North and the history of domestication in the Arctic.