Doing Development
Government, NGOs and the rural poor in Asia 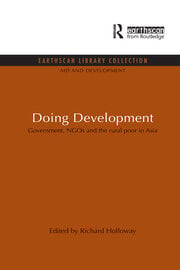 Doing Development: Government, NGOs and the rural poor in Asia

The absolutely poor, who are mostly rural people, are a large part of the developing world's population and their numbers are growing. Government development programmes, aided by the big donors, have made the poor poorer and have rendered them more powerless in relation to the rest of society. They have done this by sustaining and reinforcing existing exploitative economic, social and political structures. Yet people's movements. religious organizations, voluntary groups, universities and so on have often devised 'alternative' development strategies whose programmes are specifically intended to empower the powerless and selectively enrich the poorest. These groups lack the funds and the political punch to make much more than a dent in the situation. This book brings together some of these workers from the South who describe the problems and provide the answers. They are a challenge to the received 'wisdom' of the North. Originally published in 1989

Foreword Preface South Asia 1. The State and Voluntary Agencies in India by Rajesh Tandon of PRIA, India 2. Ten Years of Experience with Participatory Action Research in South Asia - Lessons for NGOs and Peoples' Organizations by Ponna Wignaraja of PIDA, Sri Lanka 3. Siro Mallik Goes to Buy a Pair of Buffaloes and a Cart by Joe Madiath of Gram Vikas, India 4. Legal Rights for Poor Women - SLARTC in India by Janet Durno and Manabendra MandaI 5. Community Rehabilitation of the Disabled in India by Viklang Kendra by Dr B. Banerji (founder of Viklang Kendra), Dr Malcolm Peat, and others 6. Overthrowing the Money-Lenders by S.P. Wickramaratchi South-East Asia 7. Women of the Weeping Prairie � a Perspective on GRID, Thailand by Janet Durno 8. It Happened in Si Phon Thong Village by Amporn Kaewnoo of GRID and Kosol Suthangkool, Thailand 9. From Rice/Fish to Integrated Farming: Sustainable Agriculture for Resource-Poor Farmers in North-East Thailand by Janet Durno 10. Partners in Development? The Government and NGOs in Indonesia by Richard Holloway 11. Strengthening Community-Based Technology Management Systems by James Terrent and�Hasan Poerbo 12. Encouraging the Poor to Help Themselves by M. Zainuddin and Patrick Sweeting 13. Good Manners with the Rural Poor by David Watson and Team, and Tatta Issa 14. The Unfolding of the Sarilakas Experience by Rafael S. Espiritu Afterword: Where to Next? Governments, NGOsand Development Practitioners Index