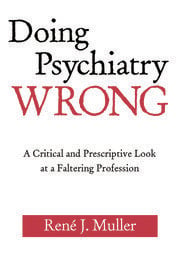 Doing Psychiatry Wrong: A Critical and Prescriptive Look at a Faltering Profession

The prospect that the psychiatric profession has hurt rather than helped many of its patients is incredibly disheartening; however, wrong diagnoses and improper treatment are all too common errors within the field.

Author René Muller presents a revealing look into how psychiatry has failed a great majority of patients, all the while recognizing the valiant efforts made by psychiatrists who maintain their integrity and serve their patients well. The result is an enlightening critique of the profession—one that pits criticism of psychiatry's current biological reduction and exaggerated promises against the accumulated wisdom of a profession that has struggled for a century and a half to understand and help those with mental illness.

René J. Muller has evaluated over 3,000 psychiatric patients in the emergency room and recounted the stories told to him there in numerous articles for Psychiatric Times, the most widely read psychiatric publication in North America. In 2003, a compilation of these articles was published as Psych ER: Psychiatric Patients Come to the Emergency Room (Analytic Press, 2003).

"Case histories in Doing Psychiatry Wrong: A Critical and Prescriptive Look at a Faltering Profession reveal a pragmatic, humanistic psychotherapy approach in which the patient's story must be heard in order to make sense of the illness and the response to it.  With skill and gumption, Muller challenges diagnoses made too easily but inaccurately by colleagues, including bipolar disorder and schizophrenia, while they often miss delirium.  Readers may like or dislike his claim that patients have an active role in their ailment and its amelioration, but he argues well, giving neuroscience and pharmacology their due while at the same time recognizing the importance of personal responsibility and social milieu.  He cares about patients and psychiatry, voicing a protest that is also a tribute to a profession whose very name means soul doctor.  This book reminds all mental health professionals that biology is always a factor, but not necessarily the most important factor, in human behavior.  Biological preemption has done a disservice to us all, and Rene Muller's prescription should be taken seriously." - E. James Lieberman, PsycCRITIQUES, 53 (5), 2008

"Doing Psychiatry Wrong powerfully challenges the current paradigm of mental illness. In his writing, Muller is not afraid to go against the grain of current societal beliefs, and the radical approach that he adopts gives his stories universal appeal. This is a passionate argument against current psychiatric methods of diagnosis and treatment. Regardless of the theoretical orientation of the reader, Muller forces mental health professionals to examine and possibly question their own approach to intervention." - Abby L. Marquart, Journal of Contemporary Psychotherapy, 2008

"Rene J. Muller, a clinician with a background in emergency room evaluations and in writing accounts of these encounters for the monthly publication Psychiatric Times, has produced a book severely critiquing the current reliance of the psychiatric profession on biological psychiatry. A phenomenologically-based critique of the DSM system is warranted. Muller's basic points remain important and argued with conviction. For too many of its practicioners psychiatry has lost the mind. The emphasis on biological psychiatry has gone to an extreme. Muller seeks to remedy this distortion." - Stephen Rojcewicz, PhD., Journal of Phenomenological Psychology