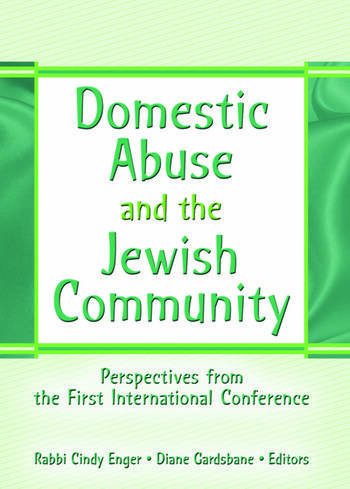 Domestic Abuse and the Jewish Community: Perspectives from the First International Conference

Learn ways to address domestic and sexual abuse in your community

Breaking the cycle of domestic violence and abuse poses unique problems for the Jewish community, owing to the internal divisions of politics, religious practice, and culture. However, creating strategies to work together based upon the shared values of Judaism can strip away those differences. Domestic Abuse and the Jewish Community: Perspectives from the First International Conference brings together an outstanding and diverse selection of notable presentations from the First International Conference on Domestic Abuse in the Jewish Community held in July 2003 in Baltimore, Maryland. The conference, entitled “Pursuing Truth, Justice, and Righteousness: A Call to Action,” brought to the forefront the disturbing, many times hidden issue of domestic abuse within the Jewish community. Respected scholars, clergy, social service professionals, and survivors provide insightful presentations that lay an essential foundation for the building of a collaborative global Jewish movement to respond to this sensitive issue.

Domestic Abuse and the Jewish Community: Perspectives from the First International Conference marks the start of a quiet revolution aimed at ending domestic abuse in various Jewish communities by revealing the many facets of the problem while offering ways to address them. Sexual and domestic abuse issues in the Jewish communities of the US, Israel, South Africa and the UK are illuminated and described, and practical strategies are discussed, keeping in mind the common goals within the varied communities. Jewish religious law is reviewed, along with an analysis of Maimomides’ response to domestic abuse, and a vision is offered to respond to child sexual abuse.

Domestic Abuse and the Jewish Community: Perspectives from the First International Conference is separated into five categories of presentations: Illuminating the Issue; Healing and Wholeness; Promising Practices; Creating Change; and Breaking the Cycle, each section progressing logically to present a unified discussion of the issues. The book discusses: