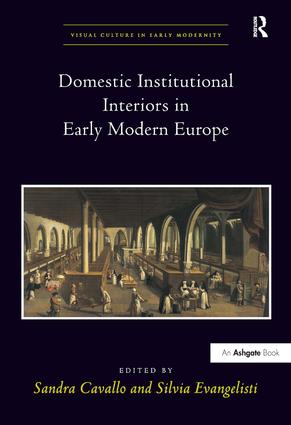 The early modern period saw the proliferation of religious, public and charitable institutions and the emergence of new educational structures. By bringing together two areas of inquiry that have so far been seen as distinct, the study of institutions and that of the house and domesticity, this collection provides new insights into the domestic experience of men, women and children who lived in non-family arrangements, while also expanding and problematizing the notion of 'domestic interior'. Through specific case studies, contributors reassess the validity of the categories 'domestic' and 'institutional' and of the oppositions private public, communal individual, religious profane applied to institutional spaces and objects. They consider how rituals, interior decorations, furnishings and images were transferred from the domestic to the institutional interior and vice versa, but also the creative ways in which the residents participated in the formation of their living settings. A variety of secular and religious institutions are considered: hospitals, asylums and orphanages, convents, colleges, public palaces of the ducal and papal court. The interest and novelty of this collection resides in both its subject matter and its interdisciplinary and Europe-wide dimension. The theme is addressed from the perspective of art history, architectural history, and social, gender and cultural history. Chapters deal with Italy, Britain, the Netherlands, Flanders and Portugal and with both Protestant and Catholic settings. The wide range of evidence employed by contributors includes sources - such as graffiti, lottery tickets or garland pictures - that have rarely if ever been considered by historians.

'… bristles with important insights into the spatial frameworks and material culture that conditioned the lives of early modern Europeans … in a variety of ways, this volume adds to current knowledge of both material culture and early modern European history.' Sharon Strocchia, Emory University, USA, author of Nuns and Nunneries in Renaissance Florence

'The thought-provoking case studies offered here represent a valuable contribution to the study of non-familial domestic environments, and provide models for future research while posing questions yet to be answered. The reader is aided in exploring the material presented by a bibliography and a good index. By studying the exchanges between objects, individuals, and institutions across highly permeable boundaries, the research in Domestic Institutional Interiors in Early Modern Europe focuses on the human experience within a range of circumstances not often studied. It challenges current notions concerning how individuals engaged with and modified their institutional environments, and it opens a door to further study.' Caa.Reviews

'… this collection of essays offers a range of interdisciplinary topics, approaches, and methods that can engage scholars beyond the confines of early modern studies… Domestic Institutional Interiors of the Early Modern Period is a book that I strongly recommend to libraries serving graduate students and research faculty.' Southeastern College Art Conference (SECAC) Review