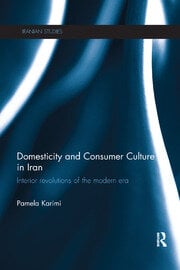 Domesticity and Consumer Culture in Iran: Interior Revolutions of the Modern Era

Examining Iran’s recent history through the double lens of domesticity and consumer culture, Domesticity and Consumer Culture in Iran demonstrates that a significant component of the modernization process in Iran advanced beyond political and public spheres.

On the cusp of Iran’s entry into modernity, the rules and tenets that had traditionally defined the Iranian home began to vanish and the influx of new household goods gradually led to the substantial physical expansion of the domestic milieu. Subsequently, architects, designers, and commercial advertisers shifted their attention from commercial and public architecture to the new home and its contents. Domesticity and consumer culture also became topics of interest among politicians, Shiite religious scholars, and the Left, who communicated their respective views via the popular media and numerous other means. In the interim, ordinary Iranian families, who were capable of selectively appropriating aspects of their immediate surroundings, demonstrated their resistance toward the officially sanctioned transformations. Through analyzing a series of case studies that elucidate such phenomena and appraising a wide range of objects and archival documents—from furnishings, appliances, architectural blueprints, and maps to photographs, films, TV series, novels, artworks, scrapbooks, work-logs, personal letters and reports—this book highlights the significance of private life in social, economic, and political contexts of modern Iran.

Tackling the subject of home from a variety of perspectives, Domesticity and Consumer Culture in Iran thus shows the interplay between local aspirations, foreign influences, gender roles, consumer culture and women’s education as they intersect with taste, fashion, domestic architecture and interior design.

Introduction  1. The Hovel, the Harem, and the Hybrid Furnishing 2. Renewing the Nation's Interiors 3. The Cold War  and the Economies of Desire and Domesticity 4. Selling and Saving Piety in Modern Dwellings 5. Gendered Spaces and Bodies out of Place Epilogue: At Home in the Islamic Republic

Pamela Karimi is Assistant Professor of Art History at the University of Massachusetts, Dartmouth. She received her PhD in history and theory of art and architecture from MIT in 2009. Her primary field of research is art, architecture, and visual culture of the modern Middle East.

"The modern and contemporary history of Iran has been seen more from political and ideological perspectives.Domesticity and Consumer Culture in Iran: Interior Revolutions of the Modern Era is an insightful and brilliantresponse to this gap in scholarship." - Ehsan Lor Afshar, The New School for Social Research, New York, USA, Journal of Design History

"Pamela Karimi’s Domesticity and Consumer Culture in Iran is a thought-provoking examination of the intersection of domestic architecture, consumerism, and the social transformation of taste in twentieth-century Iran." - Talinn Grigor, Brandeis University, Traditional Dwellings and Settlements Review

"A really good social analysis can take a seemingly minor issue and use it as a lens through which to examine multiple aspects of a complex system. Pamela Karimi has done exactly that in her impressively researched study of Domesticity and Consumer Culture in Iran....this is a fascinating and wideranging study, exemplary in the breadth and depth of scholarship Karimi has brought to bear. It will be enormously valuable to anyone interested in issues of urbanization, gender roles, experiences of modernity and modernization, consumer culture and aesthetics, and Iranian social and material history. Karimi is one of the first scholars to consider the role of consumer culture in making the Iranian experience of modernity ... but this book will not only be of interest to scholars of Iran." -Norma Claire Moruzzi, Middle East Report (Winter 2015)