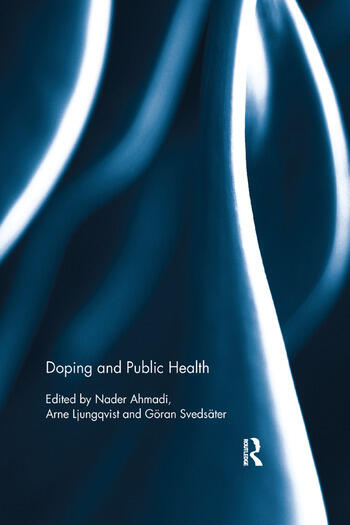 Doping – the use of performance-enhancing substances and methods – has long been a high-profile issue in sport but in recent years it has also become an issue in wider society. This important new book examines doping as a public health issue, drawing on a multi-disciplinary set of perspectives to explore the prevalence, significance and consequences of doping in wider society. It introduces the epidemiology of doping, examines the historical context, and explores the social, behavioural, legal, ethical and political aspects of doping. The book also discusses possible interventions for addressing the problem on organisational and societal levels.

incorporates the latest research to provide a comprehensive guide to the key aspects of doping as a social phenomenon. Divided into six parts, this collection of studies offers detailed insight into:

This book is a valuable resource for sport students, instructors and sport professionals, and will also be of interest to educators and policy-makers working in the areas of health, criminology, sociology and law.

Introduction (Göran Svedsäter, Arne Ljungqvist and Nader Ahmadi)  1. Doping and Public Health - Historical Background (Arne Ljungqvist)  2. Social and Behavioural Science Perspectives on Drug Use in Sport (Ivan Waddington)  3. "The winner takes it all" – Individualization and Performance-Enhancing Drugs and Methods in Sport and in Society (Nader Ahmadi and Göran Svedsäter)  4. Reflections on Doping in Sport and Doping in Society (David Hoff)  5. Adulterated Nutritional Supplements and Unapproved Pharmaceuticals as New Sources of Doping Substances for Fitness and Recreational Sports (Hans Geyer)  6. The Market for Doping Products: a Quasi-Illegal Market and its Suppliers (Letizia Paoli)  7. Interpol and the Fight against Performance – Enhancing Drugs Trafficking (Clement de Maillard and Elena Titova)  8. Anti-Doping, Performance Enhancement, and ‘The Spirit of Sport’: a Philosophical and Ethical Critique (Sigmund Loland and M J McNamee)  9. The Ethics of Doping from a Public Health Perspective (Tom Murray)  10. The Doping Tug of War – from an Olympic Sport to an Enduring Challenge to Sport and to Public Policy (Theodore Friedmann)

Nader Ahmadi has a Ph.D. in sociology and is Associate Professor and Vice President of the University of Gävle, Sweden. His research has mainly focused on areas such as welfare and social policy, international social work, identity and youth problems, coping strategies among cancer patients, socio-cultural perceptions of the self and gender roles, etc. He has been consultant for the World Bank, UNICEF and the European Commission in many countries such as Russia, Croatia, Vietnam, Azerbaijan, Tajikistan, FYR of Macedonia, Kosovo and Bosnia & Herzegovina. He has also been leader of a nation-wide research project on the health problems among the asylum-seeking children in Sweden commissioned by the Swedish Government. Ahmadi has been guest lecturer in India, China and Russia

Arne Ljungqvist - medical professor, high jumper and sports manager - has devoted his life to the service of medicine and sports. He managed to become the Swedish champion in high jump as well as participate in the Helsinki 1952 Olympics. Among others he has been Chairman of the Department of Pathology and Cytology, Karolinska Hospital; Pro Rector at the Karolinska Institute, Sweden; President of Swedish Cancer Society; Chairman of the International Olympic Committee’s (IOC) Medical Commission; founder and Vice Chairman of the World Anti-Doping agency (WADA); Chairman of the WADA Health, Medical and Research Committee. In 2014 he received an honorary doctorate from the Faculty of Health and Occupational Studies at the University of Gävle, Sweden

Göran Svedsäter has a Specialization degree in Psychology and Science of Education and is currently Lecturer at the University of Gävle, Sweden. He has been Lectuer and Leader of Research and Development at the Faculty of Education and Health Care Education, Oslo College and Lecturer at the Faculty of Health Care Education, College of Trondheim. He has also been consultant for International Doping Tests & Management (testing activities, recruiting, education and training of international sampling officers). He also has experience as doping control officer for Norwegian Confederation of Sport and as an International doping control officer for several international federations.

'...the book offers a decent outset for the student interested in discussions around anti-doping from many individuals charged with shaping anti-doping policy.'