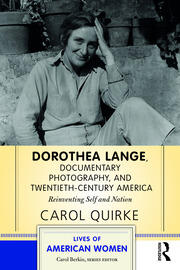 charts the life of Dorothea Lange (1895–1965), whose life was radically altered by the Depression, and whose photography helped transform the nation. The book begins with her childhood in immigrant, metropolitan New York, shifting to her young adulthood as a New Woman who apprenticed herself to Manhattan’s top photographers, then established a career as portraitist to San Francisco’s elite. When the Great Depression shook America’s economy, Lange was profoundly affected. Leaving her studio, Lange confronted citizens’ anguish with her camera, documenting their economic and social plight. This move propelled her to international renown.

This biography synthesizes recent New Deal scholarship and photographic history and probes the unique regional histories of the Pacific West, the Plains, and the South. Lange’s life illuminates critical transformations in the U.S., specifically women’s evolving social roles and the state’s growing capacity to support vulnerable citizens. The author utilizes the concept of "care work," the devalued nurturing of others, often considered women’s work, to analyze Lange’s photography and reassert its power to provoke social change. Lange’s portrayal of the Depression’s ravages is enmeshed in a deeply political project still debated today, of the nature of governmental responsibility toward citizens’ basic needs.

Students and the general reader will find this a powerful and insightful introduction to Dorothea Lange, her work, and legacy. Dorothea Lange, Documentary Photography, and Twentieth-Century America makes a compelling case for the continuing political and social significance of Lange’s work, as she recorded persistent injustices such as poverty, labor exploitation, racism, and environmental degradation.

List of figures, Series Editor Introduction, Acknowledgements, Introduction, Chapter One: Dorothea Lange and Turn-of-the-Century America, 1895-1912 Chapter Two: "I Knew It Was Dangerous to Have Something to Fall Back On": Finding the New Woman, Finding Herself, 1912-1918 Chapter Three: Love and Work: Tangled Negotiations, 1918-1929 Chapter Four: "To Grab A Hunk of Lightning:" A Radical Change of Focus, 1929-1934 Chapter Five: "Words Would Not Be Enough," 1934-1935 Chapter Six: "These Things Are a Pressin’ on Us:" Dorothea Lange as Government Photographer, 1935-1936 Chapter Seven: "The Sorriest Place in this Country:" Dorothea Lange and Southern Struggles, 1935-1939 Chapter Eight: "Moving About People" and the Great Plains, 1935-1940 Chapter Nine: "In the Ditches at the End of Beauty": California in the Depression, 1935-1940 Chapter Ten: "Woman Can Change Better’n a Man:" Women in the Great Depression, 1929-1940 Chapter Eleven: "This is What We Did, How Did it Happen, How Could We?" Democracy Under Assault, 1940-1945 Conclusion: "The Last Ditch:" Dorothea Lange and the Persistence of Vision, 1945-1965 Primary Documents: Reading Photography in the Archives, Study Questions, Bibliography, Index

‘Through the searing empathy of Dorothea Lange, Carol Quirke offers the best introduction to both the making of documentary photography as art and labor and the social justice impulses behind Lange's recording of the Great Depression and Japanese internment. Biography meets history in this wonderful history of a woman in her times who shaped how we look at the past.’

"What a delight to discover the refreshing depth of scholarship in Carol Quirke’s book.  Quirke’s choice of astounding images – ones we have come to know and many never or rarely seen – insightfully illustrate the author’s narrative. Knowing my grandmother’s intelligence as a photographer and as writer/observer, I appreciate Quirke’s inclusion of Dorothea’s field notes pertaining to each photo. This extensive research into Lange’s "day workbooks" reveals raw material few have considered. The result provides a depth of understanding and compassion for the reader, about the life and times Lange documented and about Lange herself."

‘In this highly original portrait of Dorothea Lange, Carol Quirke places her not only in the context of the history of photography but also within the social and political history of the United States. Rather than an isolated artist, Lange emerges as a part of large social, political, and cultural movements. This book ​is as much a portrait of a changing nation as it is of an extraordinary documentarian."

‘Carol Quirke offers a well-researched, accessible narrative that explores Dorothea Lange’s photography in the context of her life and times. It is at once a rich scholarly treatment and a compulsively readable story about one of the most important artists of the twentieth century. A must-have for students of photography history.’

Cara A. Finnegan, Professor of Communication, University of Illinois at Urbana-Champaign, USA

‘This book is a tender tribute to Dorothea Lange, her life, and her work evocative of American perseverance through hard times. By providing intimate details about Lange as an adventurer, an artist, and an activist, Carol Quirke allows us to get a better glimpse of what this remarkable woman truly saw through the camera lens.’

‘Long before the Great Recession of 2008, Black Lives Matter, and #MeToo, documentary photographer Dorothea Lange’s life and work probed the class, race, and gender fissures that defined the United States in the mid-twentieth century. Carol Quirke’s biography, with its sharp analysis, probing eye, and clear prose, captures why Lange remains meaningful in the twenty-first century.’

‘Few Americans have lived more fascinating or consequential lives than Dorothea Lange. Her stunning photographs, together with her personal life story, illuminate some of the most significant moments of the twentieth century. In this excellent, accessible study, Carol Quirke brings Lange to life, showing us how this pathbreaking photographer helped to shape the tumultuous era that she so movingly chronicled.’

‘Complex, compassionate, and clear-eyed, Dorothea Lange’s legacy lives in her famous portraits as well as in her passionate commitment to ordinary people’s lives and struggles. In Dorothea Lange, Documentary Photography, and Twentieth-Century America, historian Carol Quirke provides a unique and compelling story of Lange’s life and labors. Quirke successfully shows that Lange, who saw her camera as "a tool of research" and an agent of change in the U. S. and internationally, was an early and powerful advocate for the social significance of documentary photography. Lange’s empathic representations, justly celebrated worldwide, have not only endured but are even more valuable, as art and as activism, today.’