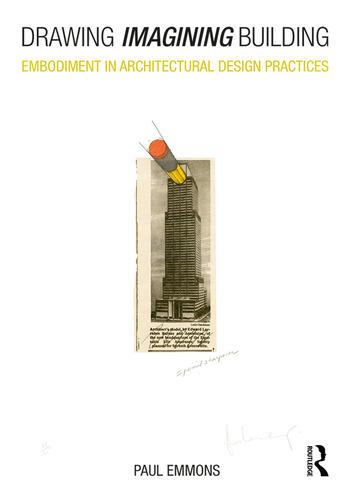 Imagining Building focuses on the history of hand-drawing practices to capture some of the most crucial and overlooked parts of the process. Using 80 black and white images to illustrate the examples, it examines architectural drawing practices to elucidate the ways drawing advances the architect’s imagination.

Emmons considers drawing practices in the Renaissance and up to the first half of the twentieth century. Combining systematic analysis across time with historical explication presents the development of hand-drawing, while also grounding early modern practices in their historical milieu. Each of the illustrated chapters considers formative aspects of architectural drawing practice, such as upright elevations, flowing lines and occult lines, and drawing scales to identify their roots in an embodied approach to show how hand-drawing contributes to the architect’s productive imagination. By documenting some of the ways of thinking through practices of architectural handdrawing, it describes how practices can enrich the ethical imagination of the architect.

This book would be beneficial for academics, practitioners, and students of architecture, particularly those who are interested in the history and significance of hand-drawing and technical drawing.

Paul Emmons is a registered architect and a professor of architecture at Virginia Tech, USA where he is Associate Dean of Graduate Studies for the College of Architecture and Urban Studies. Dr. Emmons is based at the Washington-Alexandria Architecture Center and coordinates its stream of the PhD Program in Architecture + Design Research. His widely presented and published research includes recently co-editing Confabulations, Storytelling in Architecture and Ceilings and Dreams: The Architecture of Levity.

"Architectural drawing is a practice that is no less poetic than practical. In this topically structured narrative, wide-ranging in historical scope, Paul Emmons describes the uniqueness of the architect’s intelligence and skill, in comparison with the methods and techniques that define other arts, such as farming and hunting, sewing and surgery. The art of constructing buildings is shown to be a model for drawing practice, insofar as the drawing board substitutes the building site, ink lines on paper forecasting ropes on a site, and much that will follow, though not all. Customary associations with painting and other representational arts are recast, for architectural drawing, Emmons insists, is not mimetic but projective, insofar as its objects indicate what could be built rather than what already exists. Embodied tacit knowledge is the chief protagonist in the drama of drawing, making plans, elevations and sections, with alternately legible, occult, and flowing lines. But the emergence of the rather more abstract and rationalized techniques of modern times is also explained. Students, scholars, and practitioners will find in this immensely learned and persuasively argued book an enlarged sense of the architect’s craft, a way of world-building that is productive, engaged, and imaginative." - David Leatherbarrow, Professor, University of Pennsylvania