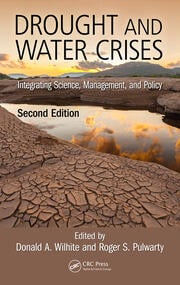 Over the past decade there have been extraordinary advances towards drought risk reduction with the development of new water-conserving technologies, and new tools for planning, vulnerability and impact assessment, mitigation, and policy. Drought and Water Crises: Integrating Science, Management, and Policy, Second Edition comprehensively captures this evolving progress as it discusses drought management in the light of present risks, global climate change and public policy actions. This new edition emphasizes the paradigm shift from managing disasters to managing risk, reflecting the global emphasis that has evolved in recent years, a new focus that shines light on preparedness strategies and the tools and methods that are essential in drought risk reduction. The book provides additional relevant case studies that integrate this new approach and discusses examples applied in both developed and developing countries.

Dr. Donald A. Wilhite is a Professor/Director Emeritus of Applied Climate Science in the School of Natural Resources at the University of Nebraska-Lincoln, U.S.A. From 2007 to 2012, Dr. Wilhite served as director of the School of Natural Resources. Previously, Dr. Wilhite was the founding director of the National Drought Mitigation Center in 1995 and the International Drought Information Center in 1989 at the University of Nebraska-Lincoln. Recently elected a Fellow in the American Meteorological Society, his research and outreach activities have focused on issues of drought monitoring, planning, mitigation, and policy, the use of climate information in decision making and climate change. He chaired the International Organizing Committee for the High-level Meeting on National Drought Policy, sponsored by WMO, FAO, and UNCCD, that was held in Geneva, Switzerland, in 2013. Dr. Wilhite has served as a consultant to WMO, FAO and the World Bank, among others, and has worked with many countries on drought management and policy issues. He chairs the management and advisory committees of the Integrated Drought Management Program, launched in 2013 by WMO and the Global Water Partnership. Dr. Wilhite has authored or co-authored more than 150 journal articles, monographs, book chapters, and technical reports and has been the recipient of more than $20 million in research grants. Dr. Wilhite is editor or co-editor of numerous books on drought and drought management.

Dr. Roger S. Pulwarty is a Senior Scientist, and the chair of the multi-agency National Integrated Drought Information System (NIDIS) Executive Council, at the NOAA Office of Ocean and Atmospheric Research, in Boulder, Colorado. Dr. Pulwarty’s publications focus on weather, climate, and risk management in the U.S., Latin America, and the Caribbean. Throughout his career, Roger has helped develop and lead widely-recognized programs on climate and adaptation, including the Regional Integrated Sciences and Assessments, NIDIS, and the Mainstreaming Adaptation project in the Caribbean. He is a lead author on UNISDR Global Assessments, on the IPCC Special Reports on Water Resources and Extremes, and a convening lead author on Adaptation in the IPCC Fifth Assessment. Roger has provided testimonies before the U.S. Congress, served on advisory committees of the U.S. National Academy of Sciences, and acts as an advisor on climate risk management and services to the Western Governors Association, the Organization of American States, USAID, UNDP, UNEP, and the InterAmerican and World Banks, among others. He co-chairs the UN World Meteorological Organization Climate Services Information System, and is member of the Global Climate Observing System Steering Committee. Roger served as co-chair of the White House Working Group on Water, Energy and Food Security, and on the Task Force on Climate and National Security. Roger is Professor-Adjunct at the University of Colorado and the University of the West Indies. He is a recipient of Department of Commerce, Caribbean Academy of Sciences and other awards for integrating research into decision-making.

"This book represents a fundamental reference for those who, like me, work in regions predominantly prone to drought and water scarcity. Integrating science, management and policy is at the heart of all efforts we are making towards drought risk reduction."
—Pasquale Steduto, Food and Agriculture Organization of the United Nations, Cairo, Egypt

"Donald (‘Dr. Drought’) Wilhite and Roger Pulwarty, two of the world’s most widely respected authorities on drought monitoring and management, make a strong case for the need to move away from reactive approaches in response to drought towards proactive policies and practices to reduce drought risk and minimize its impacts. They have assembled an extraordinary array of researchers and practitioners from various countries and disciplinary backgrounds to detail recent advances in the technical and policy aspects of drought prediction, early warning, decision support and management, and to present practical ways to improve drought management proactively in a range of contexts. This landmark book shows clearly and in detail how societies can reduce the social, economic, environmental and political impacts of drought by adopting new approaches centered on mitigation, preparedness, and early warning."
—Roberto Lenton, University of Nebraska-Lincoln, USA

"This book provides solid and fresh approaches on how to prepare for droughts. It is a one stop reference for recent developments in the drought management literature that advocates paradigm shift from reactive to proactive approaches. It is a must read for water managers, policy makers and scientists."
—Dr. Daniel Tsegai, Bonn, Germany