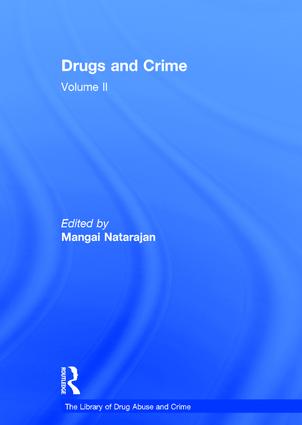 Despite twenty years of research, it is still debated whether drug dependency leads to crime, or whether involvement in crime increases the probability of drug dependency. This is because the relationship between drugs and crime is mediated by a great many variables, including the nature of the drugs, the user's degree of dependency on drugs, the life circumstances of the user, the social conditions under which the drugs are used, the laws governing obtaining and using drugs, social tolerance of drug use, availability of drug treatment programs, and so forth. This volume covers the many ways in which drugs and crime could be related that encompass and extend beyond the simple causal link between drug dependency and crime. It also reviews the main kinds of drug-related crimes and considers research that could help viable policy interventions.

’offers a panoramic overview of the broad arena of drugs and crime. The overview is at once comprehensive and contemporary…a great easy reference for seasoned researchers and a useful overview for neophyte drugs and crime researchers. Indeed, one of the fundamental contributions of the volume is that it provides students and scholars with a way to conceptualise and compartmentalise the enormous research literature on drugs and crime.’ Drug and Alcohol Review, APSAD