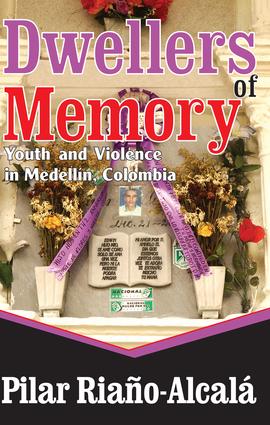 Dwellers of Memory is an ethnographic study of how urban youth in Colombia came to be at the intersection of multiple forms of political, drug-related, and territorial violence in a country undergoing forty years of internal armed conflict. It examines the ways in which youth in the city of Medellin reconfigure their lives and, cultural worlds in the face of widespread violence. This violence has transgressed familiar boundaries and destroyed basic social supports and networks of trust. This volume attempts to map and understand its patterns and flows.

The author explores how Medellin's youth locate themselves and make, sense of violence through contradictory and shifting memory practices. The violence has not completely taken over their cultural worlds or their subjectivities. Practices of remembering and forgetting are key methods by which these youth rework their identities and make sense of the impact of violence on their lives. While the experience of violence is rooted in urban space and urban youth, the memory dwellers use a sense of place, oral histories of death, and narratives of fear as survival strategies for inhabiting violent neighborhoods. The book also examines fissures in memory, the contradictory constructions of young people's subjective selves, and practices of gendered violence and terror. All have and continue to pose risks to the historical memory and cultural survival of the residents of Medellin.

Dwellers of Memory offers an alternative ethnographic approach to the study of memory and violence, one that calls into question whether the, role of the ethnographer of violence is to be a mere witness of terror, or to oppose it by writing against it. It will be of interest to sociologists, anthropologists, and students of, ethnography.

List of Maps and Images
Prologue
Preface
Acknowledgments
Introduction
Colombia at the Crossroads
Youth's Forgettings and the Politics of Memory
Bridges of Memory
The Circulation of Memories and the Traffic of Violence
An Anthropology of Remembering and Forgetting
Dwellers of Memory: The Youth in this Book

Chapter 1
Local Histories in a National Light
Clouds of Smoke: The Thirties
A War of Colors and Horrors: The Fifties
Red Lights in the Barrio: The "Tolerant" Years
Languages of Concealment: The Sixties
Travels and Travellers: The Seventies
A Troubling Image of Youth: The 1980s and 1990s
Busy Streets
Local Wars
Pigs for Peace
"Por que, a pesar de tanta mierda, este barrio es poder?"

Chapter 3
The Living Memories of Death: Oral Histories of Death and the Dead
I see his blood that falls like seed: Narratives of the Dead
"How do you speak to the disappeared?"
Chronologies of Death and Dead-Listings
Events and Their Meaning: Giving Death a Place
An Embodied Place for Death
Subjects of Death: Martyrs

Chapter 4
Ghosts, Possessed Bodies and Warriors: Narratives of Fear and Gendered Violence
Ghostly Stories and Social Regulations
"This happened to me, I have lived this": Witnesses and Possessed Spirits
Warrior Bodies, Women and Terror
Fissures in the Social Fabric and Social Tensions

Studies in Memory and Narrative is an interdisciplinary, cross-cultural series which interrogates personal and collective representations of the past. Volumes in the series analyze oral culture and personal narratives/life stories for the distinct perspective they provide on the historical experience of gender, sexuality, race, ethnicity, religion, working life, colonialism, political allegiances, mass political violence, and nationalism.  These works investigate the role played by monuments, museums, art galleries, international criminal tribunals, motion pictures, television, radio, and electronic technologies in disseminating versions of the past that supplement but often contradict personal accounts, whether written or oral. By contrasting the functions of the varied forms of remembrance and their intersections to create regimes of memory, the series promotes a fuller understanding of how remembering and forgetting, patterns of narrative communication, and social practice come together to structure personal and collective identity within overlapping, often competing versions of the past.