There is a huge amount of literature on statistical models for the prediction of survival after diagnosis of a wide range of diseases like cancer, cardiovascular disease, and chronic kidney disease. Current practice is to use prediction models based on the Cox proportional hazards model and to present those as static models for remaining lifetime after diagnosis or treatment. In contrast, Dynamic Prediction in Clinical Survival Analysis focuses on dynamic models for the remaining lifetime at later points in time, for instance using landmark models.

Designed to be useful to applied statisticians and clinical epidemiologists, each chapter in the book has a practical focus on the issues of working with real life data. Chapters conclude with additional material either on the interpretation of the models, alternative models, or theoretical background. The book consists of four parts:

Dynamic Prediction in Clinical Survival Analysis summarizes cutting-edge research on the dynamic use of predictive models with traditional and new approaches. Aimed at applied statisticians who actively analyze clinical data in collaboration with clinicians, the analyses of the different data sets throughout the book demonstrate how predictive models can be obtained from proper data sets.

Hans van Houwelingen received his Ph.D. in Mathematical Statistics from the University of Utrecht in 1973. He stayed at the Mathematics Department in Utrecht until 1986. In that time his theoretical research interest was empirical Bayes methodology as developed by Herbert Robbins. His main contribution was the finding that empirical Bayes rules could be improved by monitonization.

On the practical side, he was involved in all kinds of collaborations with researchers in psychology, chemistry and medicine. The latter brought him to Leiden in 1986 where he was appointed chair and department head of Medical Statistics at the Leiden Medical School, which was transformed into the Leiden University Medical Center (LUMC) in 1996.

Together with his Ph.D. students he developed several research lines in logistic regression, survival analysis, meta-analysis, statistical genetics and statistical bioinformatics. In the meantime, the department grew into the Department of Medical Statistics and Bioinformatics, which also includes the chair and staff in Molecular Epidemiology.

Dr. van Houwelingen was editor-in-chief of Statistica Neerlandica and served on the editorial boards of Statistical Methods In Medical Research, Lifetime Data Analysis, Biometrics, Biostatistics, Biometrical Journal and Statistics and Probability Letters. He is elected member of ISI, fellow of ASA, honorary member of the Dutch Statistical Society (VVS) and ANed, the Dutch Region of the International Biometric Society (IBS).

Dr. van Houwelingen retired on January 1, 2009. On that occasion he was appointed Knight in the Order of the Dutch Lion.

Hein Putter received his Ph.D. in mathematical statistics from the University of Leiden in 1994, under the supervision of Willem van Zwet, on the topic of resampling methods. After post-doc positions in the Department of Mathematics of the University of Amsterdam and the Free University Amsterdam, and at the Statistical Laboratory of the University of Cambridge, he turned to medical statistics in 1998, working for the HIV Monitoring Fund and the International Antiviral Therapy Evaluation Center (IATEC), based at the Amsterdam Medical Center. In 2000, Dr. Putter was appointed assistant professor in the Department of Medical Statistics and Bioinformatics of the Leiden University Medical Center.

Dr. Putter’s research interests include: statistical genetics, dynamical models in HIV and survival analysis—in particular competing risks and multi-state models. Dr. Putter collaborates closely with the Department of Surgery and the Department of Oncology of the LUMC, and with international organizations like the European Organisation for the Research and Treatment of Cancer (EORTC) and the European Group for Blood and Marrow Transplantation (EBMT). He serves as associate editor of Statistics and Probability Letters and Statistics in Medicine, and he was guest editor of special issues of Biometrical Journal and Journal of Statistical Software. He was one of the initiators of the IBS Channel Network.

In 2010, Dr. Putter was appointed full professor in the Department of Medical Statistics and Bioinformatics of the LUMC.

"It offers several original viewpoints that make it a worthwhile addition to the literature. … For the researcher wishing to gain knowledge of survival analysis beyond that of standard introductions, this is an excellent book. It contains a lot of very useful procedures and demonstrates them in practical applications on real data from the authors’ own experience. The datasets are described in Appendix A and most of the data are available from the package dynpred (Appendix B), which also contains suitable software. On the book’s website one may find R code for each chapter in the book; this is a highly useful feature. Output and plots are also available, which makes the book useful for teaching purposes."
—Odd O. Aalen, Journal of the American Statistical Association, September 2014, Vol. 109 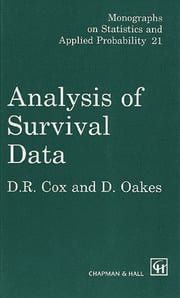