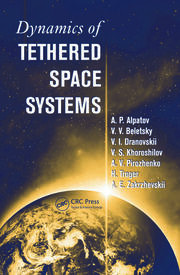 During many of the earliest American and Russian space missions, experiments were performed using cables to connect people and objects to spacecraft in orbit. These attempts generated considerable information about the formation of tethered systems and basic problems with tether orientation and gravity-gradient stabilization. During the 1970s, interest in tethered space systems (TSS) came to the forefront with an international project that involved the hanging of a probe from a low-orbit satellite to collect data on the Earth and its atmosphere. Since that time, TSS has grown to become its own area of research.

Dynamics of Tethered Space Systems brings together the work of seven leading researchers working at the forefront of TSS. Together, they provide a brief yet thorough introduction to TSS. Then, combining theory with experimental approaches important to industry, they cover the dynamics of the mechanical, physical, and mathematical modeling approaches involved in tethered satellite deployment. They present several models from the literature, focusing on the simplest but most important system: two satellites in orbit around the Earth. Discussion then expands to cover more complex examples.

Along the way, the authors consider a number of important topics, such as energy production resulting from interaction between the system and Earth’s magnetic field and momentum transfer in relation to satellites, microgravity laboratories, and futuristic applications such as the space elevator. They also look at a number of challenges, including those with deployment and energy dissipation.

Providing approaches to theoretical models and experimental methods, the text includes a wealth of essential equations and detailed analyses of forces acting on tethered objects in motion. It provides both a starting point for further research and the tools needed to apply that research to the applications of tomorrow.

USE OF RESONANCE FOR MOTION CONTROL
Introductory remarks: Formulation of the problem
Control of motion of the system around its mass centre
Control of orbital motion