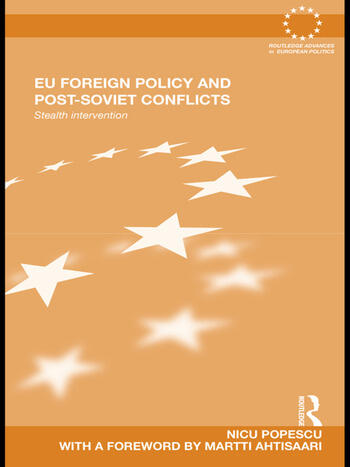 The European Union is still emerging as a fully fledged foreign policy actor. The vagaries of this process are clearly visible, yet insufficiently explained in the EU policies towards the post-Soviet space.

EU Foreign Policy and Post-Soviet Conflicts examines EU intervention and non-intervention in conflict resolution, with a specific focus on the EU’s role in the post-soviet conflicts in the South Caucasus and Moldova: Abkhazia, South Ossetia, Nagorno-Karabakh and Transnistria. It explains how EU foreign policy affected these conflicts, but more importantly what EU intervention in these conflicts reveal about the EU itself. Based on extensive field research, the author argues that the reluctant EU intervention in post-Soviet conflicts results from a dichotomous relationship between EU institutions and some EU member states. Popescu argues this demonstrates that EU institutions use policies of ‘stealth intervention’ where they seek to play a greater role in the post-Soviet space, but they do so through relatively low-profile, uncontroversial and depoliticised actions in order to avoid visible Russian opposition.

1. Introduction  2. EU Foreign Policy and Conflict Management  3. The EU's Piecemeal Involvement in Transnistria  4. The EU's Reluctant Engagment in Abkhazia and South Ossetia  5. The EU's Non-Involvement in Nagorno-Karabakh  6. Conclusions: The EU's Involvement and Reluctance

Nicu Popescu is research fellow at the European Council on Foreign Relations in London. He has worked as a senior foreign policy advisor to the Prime-Minister of Moldova, and researcher at the Centre for European Policy Studies in Brussels. Nicu holds a doctorate in political science from the Central European University in Budapest.

‘The present book provides the ultimate guide to EU’s performance in conflict management in the post-Soviet space. This is not a book written based on research in a warm office. Nicu Popescu has criss-crossed the conflict regions. The book shows in minutiae detail how much the EU has progressed in becoming a conflict management actor, but also how difficult and contradictory that process still is.’ - Martti Ahtisaari, is Nobel Peace Prize Laureate and former President of Finland

‘United Europe is going through a turbulent yet extremely challenging and exciting period, which requires strengthening the role of the Union as a capable player on the international stage, promoting peace, security and stability and protecting the European values and interests. In fulfilling these ambitions, the EU should undoubtedly start from its Neighbourhood, making best use of the new possibilities, offered by the Lisbon Treaty. Nicu Popescu urges for stronger engagement of the EU with persisting security problems, especially in the South Caucasus. I could hardly disagree with the necessity to do more in this region. We should start by an enhanced confidence-building process, implementing specific well-conceived, well-targeted projects. Nicu Popescu's book offers an excellent starting point for this debate.’ - Nikolay Mladenov, Minister of Foreign Affairs of Bulgaria

‘A successful EU foreign policy can only start with successful policies in the neighbourhood. This book shows in detail the successes and failures of EU foreign policy in EU’s Eastern neighbourhood and persuasively argues that the EU can only become a global power if it is able to tackle effectively problems in its immediate vicinity. The post-Soviet conflicts are a key test for EU’s foreign policy ambitions.’ - Ion Sturza, former Prime-Minister of Moldova

‘The 2008 war in Georgia and the sudden loss of impetus to NATO expansion in the region have demonstrated the dangers of a security vacuum in Eastern Europe and the Caucasus. Nicu Popescu is uniquly well-qualified to examine whether the EU can fill the gap.’ - Andrew Wilson, Reader in Ukrainian Studies, School of Slavonic and East European Studies, University College London

‘The EU declares that it provides security and stability to the whole
of Europe. Is this the case in Europe's troubled eastern region?
Clearly, not yet. Nicu Popescu's work on the conflicts that afflict
this part of Europe shows an EU that is increasingly engaged but not
strategic. The EU is there in these conflicts, but not sure why. This
unique and original work should be mandatory reading for the new
External Action Service.’ - Dov Lynch, Author of 'Engaging Eurasia's Separatist States' and former senior advisor to OSCE Secretary General