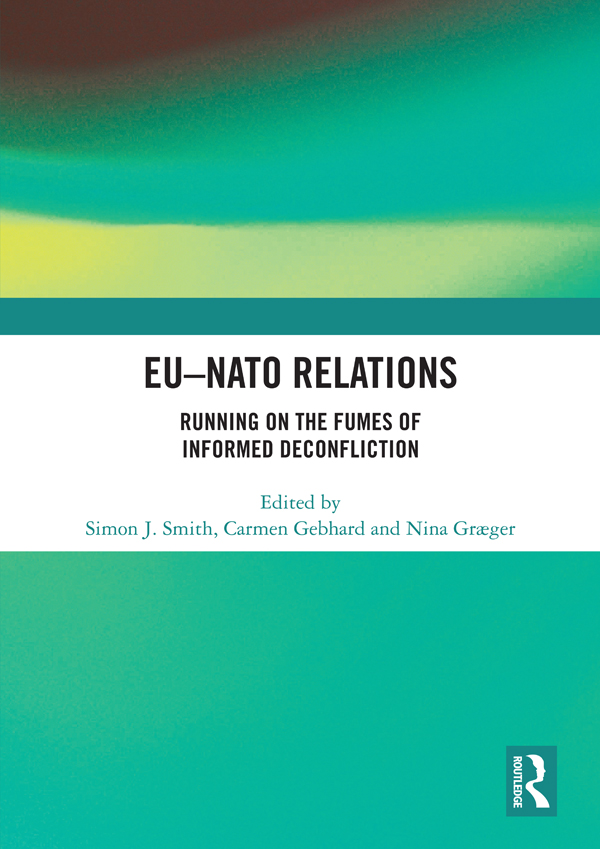 Running on the Fumes of Informed Deconfliction, 1st Edition

For almost fifteen years, both the EU and North Atlantic Treaty Organization (NATO) have claimed to partake in a relationship that is purported to be a ‘Strategic Partnership’, albeit one that is troubled by lasting political blockages. The constraints that affect the formal relationship between the two organizations are well-covered terrain in the academic literature – including by most of the contributors to this volume; however, the popular argument that the EU and NATO simply do not cooperate in any substantive way warrants deeper investigation, both theoretically and thematically. Thus, EU-NATO relations might not at first seem like an under-researched area, but much of the existing literature on the issue re-engages oversimplified and formulaic statements about the nature, quality, and practice of interactions between the EU and NATO.

This volume aims to develop the EU-NATO research agenda by pursuing three key objectives: (1) reduce the lacuna of theoretically informed analyses of the relationship, (2) add empirically and analytically rigorous case studies to the relevant body of literature, and (3) point to possible developments and solutions in the 'Strategic Partnership'.

The chapters in this book were originally published as a special issue in European Security.

Introduction - EU–NATO relations: running on the fumes of informed deconfliction

2. Grasping the everyday and extraordinary in EU–NATO relations: the added value of practice approaches

3. The Father, the Son and the Holy Ghost: a Grounded Theory approach to the comparative study of decision-making in the NAC and PSC

4. The EU and NATO’s dilemmas with Russia and the prospects for deconfliction

5. The EU, NATO and the European defence market: do institutional responses to defence globalisation matter?

6. The Single European Sky: a window of opportunity for EU–NATO relations

7. The EU and NATO in Georgia: complementary and overlapping security strategies in a precarious environment

Simon J. Smith is currently an Associate Professor in Security and International Relations (IR) at Staffordshire University, Stoke-on-Trent, UK, as well as a Senior Research Fellow at the Scotland Institute, UK, an Honorary Research Fellow at Aston University, Birmingham, UK, and Co-Editor-in-Chief of Defence Studies.

Carmen Gebhard is aSenior Lecturer in Politics and International Relations at the University of Edinburgh, UK. She is Co-Editor-in-Chief of Defence Studies. Her research interests are inter-organisational cooperation in security and defence, the EU’s external relations, and foreign policy of small states.

Nina Græger is a Senior Research Fellow at Norwegian Institute of International Affairs, Norway, and Associate Professor II at the Norwegian University of Life Sciences, As, Norway. Her research interests are security practices; inter-organisational relations; IR; European, transatlantic, and Norwegian security and defence; and military sociology.