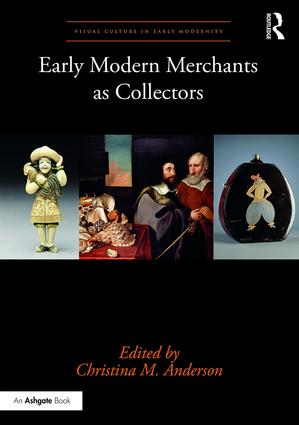 Early Modern Merchants as Collectors encourages the rethinking of collecting not as an elite, often aristocratic pursuit, but rather as a vital activity that has engaged many different groups within society. The essays included in this volume consider merchants not only as important collectors in their own right, as opposed to merely agents or middlemen, but also as innovators who determined taste. Through bringing together contributions on merchant collectors across a wide geographical spread, including England, The Netherlands, Venice, Moghul India, China and Japan, among other locations, it aims to challenge the often Eurocentric view of the study of collecting that has shaped the discipline to date. The early modern period and its Wunderkammern formed the subject of some of the earliest, foundational texts on collecting. This volume expands on such previous scholarship, taking a more in-depth look at a particular class of collectors and investigating their motivations, social and economic circumstances, and the intellectual ideas and purposes that informed their collecting. It offers a fresh approach to the understanding of the role of merchants in early modern societies and will serve as a resource to historians of art, science, museums, culture and economics, as well as to scholars of transcultural studies.

"The … essays were selected in order to produce a broad polyfocal perspective that includes a variety of geographical (also non-western) milieus, motivations, [and] social and economic circumstances … The questions raised … address a wide range of collecting categories … [providing] a wealth of refreshing perspectives on the topic.  In particular, through focusing on "merchants as collectors" … [the volume explores] an anthropological dimension of the practice of collecting: When is a collection a collection? …  What about the collection as a warehouse? The answers to [these questions] can be as diverse as the case studies here, like the reading of Early Modern Merchants as Collectors teaches … The questions themselves will not become obsolete."

Introduction: The Early Modern Merchant as a Collector

Part I: Beginning to Collect

1. The Commissioning and Collecting of Portraits by Merchants in Sixteenth- and Early Seventeenth-Century England

2. Portraits, Pearls and Things ‘wch are very straunge to owres’: The Lost Collections of the Thorne/Withypoll Trading Syndicate, 1520 – 1550

3.Tea and Commerce: Japanese Merchants in the Sixteenth Century as Collectors and Creators

Part III: The Role of Provenance

5. Imperial Treasures in the Hands of a Ming Merchant: Xiang Yuanbian’s Collection

7. Boudewijn’s Books: A Dutch Golden Age Merchant and his Library

9. Between Collection and Stock. The Ambiguous Role of Merchants and Artisans in the Sixteenth-Century Roman Antiquities Market

10. Merchants as Collectors and Art Dealers: The Cases of Daniel Nijs and Carlo Hellemans, Flemish Merchants in Venice

12. Gaspard de Monconys, Provost-Marshal of the Merchants and Collector in Seventeenth-Century Lyon

Part VII: Merchants and Collecting in the Islamicate World

Christina M. Anderson is British Academy Postdoctoral Fellow in the History Faculty, and Research Fellow in the Study of Collecting at the Ashmolean Museum, University of Oxford, UK.