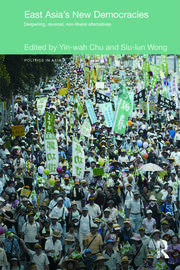 This collection brings us up-to-date on the contemporary situations in the new democracies of East Asia, and debates on the prospect of introducing liberal democracy to this part of the world. The chapters cover a wide range of cases, including in-depth examination of China, Korea, Taiwan, the Philippines, Thailand, and broad comparisons of Malaysia, Singapore, Indonesia, Vietnam, and other countries.

The contributors, who are foremost experts in their fields, examine the roles performed by civil society, social classes, and strategic groups, as well as the intertwining of values and interests in the transition to, consolidation of, and reversal from democracy. They also evaluate the extent to which these new democracies have facilitated regional peace, helped extend social welfare benefits, bolstered poverty alleviation, and upheld the rule of law and human rights. Grounding their analyses in the historical development of these societies, and/or examining them through the comparative strategy they also explore the desirability of liberal democracy, whether in the subjective assessment of the Asian people or in relation to the social-political challenges faced by these Asian countries.

Siu-lun Wong is Professor and Director of the Centre of Asian Studies, University of Hong Kong.

"This volume is a very useful update on the status of democratic transition and consolidation in East and Southeast Asia...On the whole, this is a laudable effort to provide a comprehensive survey of democratization and its consequences in East Asia. It has succeeded, to a considerable extent, in applying mainstream theories of democratization to the region’s rich but varied experiences." - Minxin Pei, Pacific Affairs: Volume 85, No. 1 - March 2012