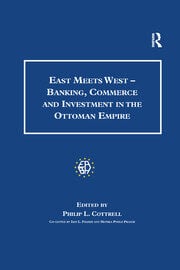 Bringing together cultural, economic and social historians from across Europe and beyond, this volume offers a consideration from a number of perspectives of the principal forces that further integrated the Ottoman Empire and Western Europe during the first century of industrialisation. The essays not only review and analyse the commercial, financial and monetary factors, negative as well as positive, that bore upon the region's initial stages of modern transformation, but also provide a ready introduction to major aspects of the economy and society of the Ottoman Empire in the nineteenth century. Beginning with two chapters providing the context to the development of Ottoman relations with Western Europe up to the second half of the nineteenth century, the collection then moves on to explore more specific questions of trade links, the impact of improved transportation and communications, the development and changing nature of Ottoman finance and banking, as well as European investment in Turkey. The outcome is a broad ranging consideration of how all these issues played a fundamental role in the final decades of the Ottoman Empire and the emergence of Turkey as a modern state with links to both east and west. The essays in this collection derive from the EABFH colloquium held in the Imperial Mint, Istanbul, in October 1999.

Contents: Introduction, Philip L. Cottrell; Evolution of domestic borrowing in the Ottoman empire, Murat Ã‡izakÃ§a; From bimetallism to the 'limping gold standard': the Ottoman monetary system in the 19th century, Sevket Pamuk; Trading links: patterns of information and communication: the steamship and the modernization of East-West commerce, David M. Williams; Europe and the Ottoman empire in mid-19th century. Development of a bourgeoisie in the European mirror, Ã‡aglar Keyder; A survey of European investment in Turkey, 1854-1914. Banks and the finance of the state and railway construction, Philip L. Cottrell; A general survey of the history of the Imperial Ottoman Bank, André Autheman; State borrowing and the Imperial Ottoman Bank in the bankruptcy era (1863-1877), Christopher Clay; French investments in public and private funds in the Ottoman empire on the eve of the Great War, Jacques Thobie; The financial structure of the stock exchange in the late Ottoman empire, Zafer Toprak; Anatolian and Baghdad railways: investment and foreign policy before the Great War, Boris Barth; Bibliography; Index.

Philip L. Cottrell is Professor of Financial History at the University of Leicester, UK. Co-editors Monica Pohle Fraser and Iain I. Fraser are based at the European Association for Banking and Financial History, Frankfurt, Germany.

’... a rich survey of the broad literature examining the transformation from a variety of perspectives... I recommend East Meets West to the general historian or the Ottoman specialist looking for brief surveys of the issues faced by the Ottoman Empire in its integration into the world economy in the nineteenth century.’ EH.NET ’This collection of essays from distinguished Turkish, British, French and German scholars will further enhance our understanding of the complicated interrelationship between Europe and the Ottoman Empire during its final century.’ Business History Review ’The volume brings together contributors whose work in this field has spanned many years, and thus it is a valuable stock-in-trade of the field.’ Financial History Review 'Overall, the volume offers substantial economic and financial histories. Quite solidly packed, the articles provide details and perspectives that historians of empire, finance, and the Ottoman world ignore at their peril.' English Historical Review