Eastern Christianity and Politics in the Twenty-First Century 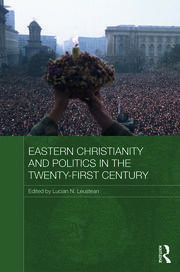 Eastern Christianity and Politics in the Twenty-First Century

This book provides an up-to-date, comprehensive overview of Eastern Christian churches in Europe, the Middle East, America, Africa, Asia and Australia. Written by leading international scholars in the field, it examines both Orthodox and Oriental churches from the end of the Cold War up to the present day. The book offers a unique insight into the myriad church-state relations in Eastern Christianity and tackles contemporary concerns, opportunities and challenges, such as religious revival after the fall of communism; churches and democracy; relations between Orthodox, Catholic and Greek Catholic churches; religious education and monastic life; the size and structure of congregations; and the impact of migration, secularisation and globalisation on Eastern Christianity in the twenty-first century.

‘This timely collection of essays provides a thorough and nuanced understanding of the multifaceted role of Eastern Christianity and politics that takes us beyond the caricatures of the so-called "clash of civilizations." In this globalized post-secular age of the resurgence of religion, this book reveals how the form of the relation between Eastern Christianity and politics is specific to the particular part of the world in which Eastern Christianity finds itself--Eastern Europe, Middle East, Asia, North Africa or the the diaspora communities of North America, Western Europe and Australia. Given the utter ignorance of the complexities of Eastern Christianity that pervades western academic discourse, this book is a must read for scholars and students of international relations, politics and the study of religion, as well as government officials interested in a well-informed and serious engagement with politics in light of - not in spite of - religion.’ – Aristotle Papanikolaou, Archbishop Demetrios Chair in Orthodox Theology and Culture, Fordham University, USA

‘This excellent collection brings together some of the best researchers in the field, who skilfully tackle the problem of applying traditional understandings of religion and politics or secularisation theory to the world of Eastern Christianity. They offer new insights into the ways in which churches have coped with the particular challenges they face in responding to political reconstruction, nation-building, political conflict, religious pluralism and the consequences of globalisation.’ – John Anderson, Professor of International Relations, University of St Andrews, UK

‘An impressive panorama of encyclopedic scope on the problems and prospects of the Eastern Churches. The several chapters provide convincing evidence on the renewal of religious life and on the strivings of the Orthodox and other Eastern Churches to come to grips with the challenges of the twenty first century.’ – Paschalis Kitromilides, Professor of Political Science, University of Athens, Greece

‘One of the difficulties of understanding the politics of the peoples of Eastern Europe and their various diasporas, for example in Serbia and Ukraine, is due to the culpable ignorance of western journalists of the role of religion in Orthodox cultures. This book provides a comprehensive and authoritative coverage which could do much to increase our understanding.’ – David Martin, Professor Emeritus of Sociology, London School of Economics and Political Science and Fellow of the British Academy, UK

‘Lucian Leustean has established himself as the pre-eminent scholar of the Orthodox and other Eastern Churches. This fascinating collection of essays, all written by authoritative researchers, discusses the myriad of issues facing the Orthodox world on every continent. Among the key issues of 21st century state relations to be discussed are the tension between the Russian Orthodox and Ukrainian Greek Catholic communities in Ukraine, the role of the Georgian Church in asserting that people's nationhood, and that of the nearby Orthodox Church in Abkhazia; and, in the cauldron of the Middle East, the politics of the Coptic Church in Egypt and the various churches of Syria. For students of the coloured revolutions and the Arab Spring, this book is a must.’ – Geoffrey Swain, Alec Nove Chair in Russian and East European Studies, University of Glasgow, UK

"This massive and very impressive volume presents an unusually broad and contemporary picture of Eastern and Oriental churches, now spread globally, with a primary focus on politics, or the relationship between Orthodoxy and state formations."
Reviewed by Walter Sawatsky, Professor Emeritus of Church History & Mission, Anabaptist Mennonite Biblical Seminary, Elkhart IN.

"There is no single volume that encapsulates so much material on the often little-known or understood world of Orthodoxy. Mandatory for reference collections."

Summing Up: Essential. Lower-level undergraduates and above; general readers.CHOICE