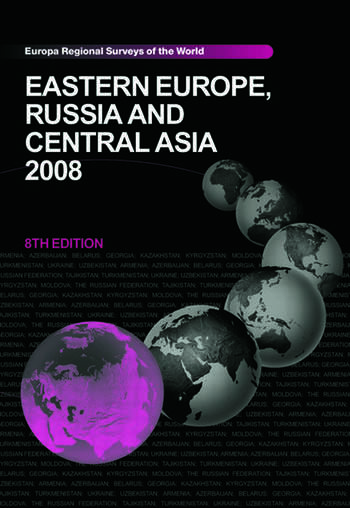 Extensive coverage of the political, economic and social affairs of the region. This impartial up-to-date survey of the countries and territories that make up the region includes:

* the latest statistics on the major economic indicators and population

* leading authorities on the region analyse topics of regional importance including: An Economic Survey of the Commonwealth of Independent States (CIS); International Relations of Russia and the CIS; The Politics of Energy in the Caspian Sea Region; Uneven Progress towards Democracy in the Region; Poverty and Social Welfare; Organized Crime; The Politics of Water in Central Asia; and Environmental Degradation.

Individual chapters on every country containing:

* an introductory survey, containing essays on the geography, recent history and economy of each country, which includes a map and full chronology

* biographical details on more than 160 of the leading political figures in the region.

'Eastern Europe, Russia and Central Asia is an important new guide to the region.' - Reference Reviews