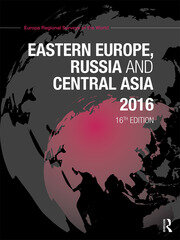 Chapters on each country, containing:

- essays on its recent history and economy, and a chronology of events

- a comprehensive directory of the most significant political, commercial and cultural institutions

- a bibliography of books concerned with the country's history, politics and economy

- detailed coverage of the self-proclaimed secessionist territories of the region, including, for the first time, chronologies of events.

- select bibliographies of books and periodicals.

have long been regarded as premier reference resources, providing authoritative political and economic data for every country and region of the world, biographical profiles of the most influential global figures in every field, including politics, science, business, academia, the arts and the media, and unrivalled access to information on universities, libraries and other academic institutions world-wide.

'An important new guide to the region.'