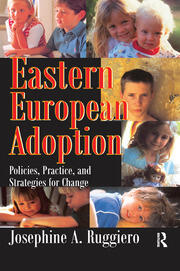 Between 1990 and 2006, more than 76,000 children born in Eastern Europe were adopted into American families. Almost two-thirds of these children came from Russia. And in contrast to children adopted from Korea, China, Central America, and South America, most of the Russian children were not infants, but between one and four years old. This volume addresses adoption policies and practices as they pertain to adopted children from Eastern Europe, children who have histories of "pre-adoption adversity." Drawing on her decade-long experience as an adoptive parent of siblings born in Russia and her expertise as an applied sociologist, Josephine Ruggiero examines the central issues involved in international adoptions, focusing on older children as well as siblings, and suggesting needed changes in policy and practice.

Regardless of whether children are adopted domestically or internationally, age is a significant factor in their ability to adjust to and function well in their new families. Only about three in ten Russian adoptees joined their new families as infants. Pre-adoption experiences are also significant factors in a child's ability to adjust and function well in a new family. Countries differ in risk factors that may figure into the likelihood of adoptees adapting to life in a new family. Fetal Alcohol Syndrome, serious medical conditions, emotional problems, behavioral problems, attachment issues, learning disabilities, and exposure to family violence must be considered as potential risk factors in adoptions. Pre-adoption adversity is less likely when children come from birth families that are economically poor but have bonded with them.

At a time when adoption has finally "come out of the closet" and the definition of the family is changing dramatically, Eastern European Adoption takes a much-needed look at current adoption policies and practices and how well they do or do not work. Ruggiero draws on the literature on older-child and sibling adoption, and data from a questionnaire survey she designed and conducted with 121 adoptive parents. Ruggiero's examples from real adoptive families give a human face to the issues, needs, and strategies she discusses.