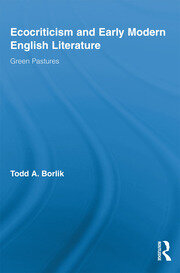 In this timely new study, Todd A. Borlik reveals the surprisingly rich potential for the emergent "green" criticism to yield fresh insights into early modern English literature. Deftly avoiding the anachronistic casting of sixteenth- and seventeenth-century authors as modern environmentalists, he argues that environmental issues, such as nature’s personhood, deforestation, energy use, air quality, climate change, and animal sentience, are formative concerns in many early modern texts. The readings infuse a new urgency in familiar works by Shakespeare, Sidney, Spenser, Marlowe, Ralegh, Jonson, Donne, and Milton. At the same time, the book forecasts how ecocriticism will bolster the reputation of less canonical authors like Drayton, Wroth, Bruno, Gascoigne, and Cavendish. Its chapters trace provocative affinities between topics such as Pythagorean ecology and the Gaia hypothesis, Ovidian tropes and green phenomenology, the disenchantment of Nature and the Little Ice Age, and early modern pastoral poetry and modern environmental ethics. It also examines the ecological onus of Renaissance poetics, while showcasing how the Elizabethans’ sense of a sophisticated interplay between nature and art can provide a precedent for ecocriticism’s current understanding of the relationship between nature and culture as "mutually constructive." Situating plays and poems alongside an eclectic array of secondary sources, including herbals, forestry laws, husbandry manuals, almanacs, and philosophical treatises on politics and ethics, Borlik demonstrates that Elizabethan and Jacobean authors were very much aware of, and concerned about, the impact of human beings on their natural surroundings.

List of Figures Acknowledgments Introduction 1: Reincarnating Pythagoras: Anima Mundi and Renaissance Gaia Theory 2: Mute Timber?; Environmental Stichomythia in The Old Arcadia and Poly-Olbion 3: The Reformation and the Disenchantment of Nature 4: "Hast Any Philosophy In Thee, Shepherd?": Environmental Ethics and the Good Life in Renaissance Pastoral 5: Rethinking Dominion: Pastoral and the Republic of Nature Conclusion: Ecocriticism as a Version of the Pastoral Notes Bibliography Index

Todd A. Borlik is Assistant Professor of English at Bloomsburg University, USA.