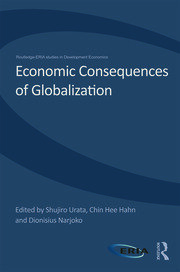 Economists have long recognized the gains from international trade. The question is, does international trade – or more broadly, globalization – increase growth? Notwithstanding the debates, there are still many questions, old and new, need to be explored in order to improve our understanding on various aspects of globalization, including its consequences. This book addresses some of these questions, utilizing micro datasets of some East Asian countries. The focus on East Asia is particularly interesting for the reason that most of these countries have relatively more opened economy and experienced a rapid de facto integration quite recently.

The book puts forward questions which are related to the relationship between globalization on the one hand, and firm performance, activities, or characteristics, on the other. The chapters draw recent theoretical framework from the relevant literatures, and then empirically test - mostly by econometric analysis – the hypotheses on these relationships. The extent or magnitude of the globalization impact is also demonstrated by the means of descriptive analysis. Finally, there are useful insights for policy decision-makers to be drawn from the empirical results.

The book presents rigorous empirical analysis based on recent theoretical framework in international economics, focusing on the highest growing region in the world. The use of micro-data analysis – a key feature of this book – gives us much richer information on various issues of globalization. This book, therefore, should be of the interest to scholars and postgraduate students of international economics, development economics, and East Asian economics.

Chin Hee Hahn is Associate Professor at Department of Economics Gachon University. Until recently, he has worked as a Senior Fellow at Korea Development Institute (KDI), Adjunct Professor at KDI School of Public Policy and Management, Editor-in-Chief of an academic journal KDI Journal of Economic Policy. He has also served as Korea Country Coordinator of NBER-EASE (East Asia Seminar on Economics) and EADN (East Asia Development Network). Dr. Hahn received his Ph.D. in Economics from the University of Chicago. He specializes in growth and development and international trade, has published books and articles in related issue. His recent co-edited books include The Rise of China and Structural Changes in Korea and Asia, Edward Elgar, 2010, Economic Consequences of Globalization: Evidence from East Asia, Routlege, 2011 (forthcoming), Trade and Innovation in East Asia , ERIA, 2011, Responding to Climate Change: Global Experiences and the Korean Perspective, Edward Elgar, 2012 (forthcoming), Reforms for Korea’s Sustained Growth, KDI Press, 2011.

Dionisius Narjoko is a researcher at the Economic Research Institute for ASEAN and East Asia (ERIA). Dr. Narjoko received his Ph.D. in Economics from the Australian National University. His research concentrates on the topics related to industrial organization, international trade, and development economics, including industrialization. He has published some articles and book chapters on these, including the co-authored book Industrialisation after a Deep Economic Crisis: Indonesia, published in Journal of Development Studies, 2010, and Winners and Losers during Deep Economic Crisis: Firm-level Evidence from Indonesian Manufacturing, published in Asian Economic Journal, 2008.