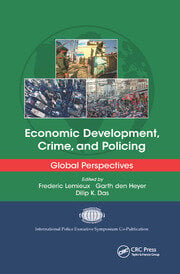 The 22nd Annual Meeting of the International Police Executive Symposium was held in August 2012 at the United Nations Plaza in New York. Chaired by Dr. Garth den Heyer, the symposium focused on the links between economic development, armed violence, and public safety. Drawn from these proceedings, Economic Development, Crime, and Policing: Global Perspectives presents the insight of police leaders and researchers from a number of countries. They provide worldwide perspectives and case studies about the complex interrelations and influence of these issues on police practice in developed, developing, and transitioning countries.

The book organizes these topics according to regional perspectives (global, modern democracies, emerging democracies, and newly industrialized countries). It highlights ongoing response efforts related to challenges facing the police in emerging or newly democratized states. The book concludes with a comprehensive review of the fundamental elements of police reform and explores how such changes might affect society. It discusses the role of society in reforming police systems and suggests new directions for this broad research agenda.

This book is a co-publication with the International Police Executive Symposium.

Frederic Lemieux is a professor and director of police science and Security & Safety Leadership Programs at the George Washington University, Washington, D.C. He received his PhD in criminology from the University of Montreal, Canada, in 2002. Dr. Lemieux’s research has focused on social control and policing. He is currently conducting studies on transnational drug trafficking enforcement and on the function of criminal intelligence as a formal social control tool. Dr. Lemieux has also published three books and various journal articles examining crime control during major disasters, counterterrorism and intelligence agencies, and police cooperation.

Garth den Heyer is an inspector with the New Zealand Police. He is also a senior research fellow with the Police Foundation in Washington, D.C. He received his doctorate in public policy from the Charles Sturt University, Manly, Australia, in 2006. Dr. den Heyer’s research has focused on police service delivery effectiveness and police reform in postconflict nations. He is currently conducting research on the cost-reducing strategies adopted by police agencies to maintain effective and efficient delivery of services. Dr. den Heyer has also published three books and various journal articles examining police structures and performance, policing in developing nations, and the police’s role in countering terrorism.

Dilip K. Das has extensive experience in police practice, research, writing, and education. A professor of criminal justice, former police chief, founding editor-in-chief of Police Practice and Research: An International Journal, Dr. Das is a human rights consultant to the United Nations. Founding president of the International Police Executive Symposium, Dr. Das has authored, edited, and coedited more than 30 books and numerous articles. He has traveled extensively throughout the world in comparative police research, as a visiting professor in various