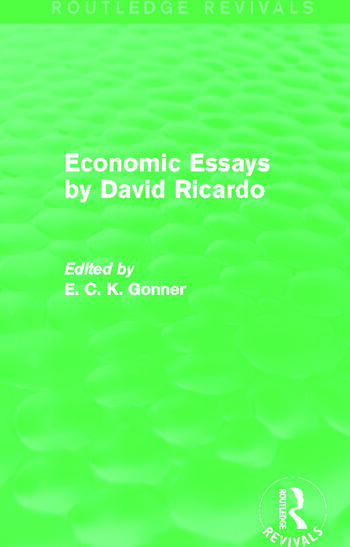 David Ricardo (1772 – 1823) was a hugely influential British political economist and stock trader. This volume, first published in 1923, contains five important pamphlets published by him, edited and with an overarching introductory essay by E. C. K. Gonner. Each essay relates either to monetary and financial subjects - including the high price of Bullion, monetary theory and the position of the Bank of England - or to the agricultural conditions of Britain and proposed solutions to the problems discussed. This is a fascinating and detailed work, which will be of great value to those with an interest in Ricardo’s theories and British economic history.

Part I: High Price of Bullion; Part II: Reply to Mr. Bosanquet’s Practical Observations on the Report of the Bullion Committee 1. Preliminary Observations – Mr. Bosanquet’s Objections to the Conclusions of the Bullion Committee Briefly Stated 2. Mr. Bosanquet’s Alleged Facts, Drawn from the History of the State of Exchange, Considered 3. Mr. Bosanquet’s Alleged Facts, in Supposed Refutation of the Conclusion that a Rise in the Market Price of Bullion above the Mint Price proves a Depreciation of the Currency, Considered 4. Mr. Bosanquet’s Objection to the Statement that the Balance of Payments has been in Favour of Great Britain, Examined 5. Mr. Bosanquet’s Argument to Prove that the Bank of England has not the Power of Forcing the Circulation of Bank Notes, Considered 6. Observation on the Principles of Seignorage 7. Mr. Bosanquet’s Objections to the Proposition that the Circulation of the Bank of England Regulates that of the Country Banks, Considered 8. Mr. Bosanquet’s Opinion that Years of Scarcity and Taxes have been the Sole Cause of the Rise of Prices, Excessive Circulation No Cause, Considered 9. Mr. Bosanquet’s Opinion, that Evil would Result from the Resumption of Cash Payments, Considered; Part III: Proposals for an Economical and Secure Currency, with Observations on the Profits of the Bank of England as they Regard the Public and the Proprietors of Bank Stock 1. In the Medium of Circulation, Cause of Uniformity is Cause of Goodness 2. Use of a Standard Commodity – Objections to it Considered 3. The Standard, its Imperfections. Variations below without Allowance of the Countervailing Variations above the Standard, their Effects. Correspondence with the Standard the Rule for Paper Money 4. An Expedient to bring the English Currency as near as Possible to Perfection 5. A Practice which creates a great Mass of Mercantile Inconvenience. Remedy proposed 6. The Public Services of the Bank excessively overpaid. Remedy proposed. 7. Bank Profits and Savings. Misapplication. Proposed Remedy; Part IV: Influence of a Low Price of Corn on the Profits of Stock; Part V: On Protection to Agriculture 1. On Remunerating Price 2. On the Influence of a Rise in Wages on the Price of Corn 3. On the Effects of Taxes Imposed on a Particular Commodity 4. On the Effect of Abundant Crops on the Price of Corn 5. On the Effect produced on the Price of Corn by Mr. Peel’s Bill for restoring the Ancient Standard 6. On the Effects of a Low Price of Corn on the Rate of Profits 7. Under a System of Protecting Duties, established with a view to give the Monopoly of the Home Market to the Home Grower of Corn, Prices cannot be otherwise than Fluctuating 8. On the Project of Advancing Money in Loan, to Speculators in Corn, at a Low Interest 9. Can the Present State of Agricultural Distress be attributed to Taxation?; Conclusion