Economics Blue Book of the People's Republic of China, 1999 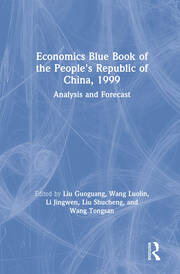 Economics Blue Book of the People's Republic of China, 1999

This is the preeminent and most authoritative annual report and forecast on the Chinese economy, now ranked among the three largest economies in the world as well as one of the most swiftly changing. Researched and written by a quasi-official organ of the Chinese government, it devotes many chapters to structural reforms that are drawing attention around the world. Coverage includes general forecasts and policy analyses on the Chinese economy, reports on specific regions within China including Hong Kong, reviews of the global economic situation, and prospects for the future of China.

This book describes and analyzes how politics among the Chinese leadership has operated and evolved from the period of Mao's court up to the present day. Part I explores politics under Mao and Deng. For this section the five leading western analysts of elite Chinese politics -- Lowell Dittmer, Lucian Pye, Frederick Teiwes, Andrew Nathan, and Tsou Tang -- have contributed major papers that measure the empirical evidence against political science theory, recent Chinese history, and Chinese political culture. Part II explores and analyzes the ongoing changes in Chinese politics during Jiang's tenure, and includes analyzes by almost all the leading English-language scholars in the field.