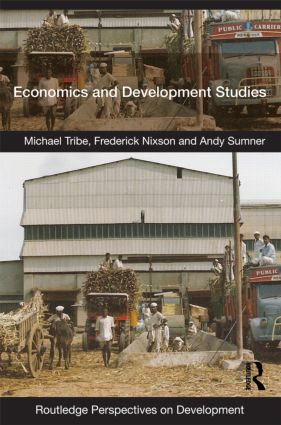 This book synthesizes existing development economics literature in order to identify the salient issues and controversies and make them accessible and understandable. The concern is to distinguish differences within the economics profession, and between economists and non-economists, so that the reader can make informed judgments about the sources of these differences, and about their impact on policy analysis and policy advice. The book features explanatory text boxes, tables and diagrams, suggestions for further reading, and a listing of the economic concepts used in the chapters.

"For far too long students of development studies have found economics, particularly its mainstream variant, to be arcane and inaccessible due to barriers of language and method. Instead of absorbing and at times confronting the discipline, many students have side-stepped important economic issues. Economics, in turn, has been able to dismiss insights from development studies as outside their field. Tribe, Nixson and Sumner have written a highly accessible new volume that goes beyond the dogma of mainstream economics to incorporate the richness and diversity of the field of development economics. Their book will undoubtedly create a new level of economic literacy in the next generation of development studies students and contribute to an improved dialogue of the disciplines." Howard Stein, Professor, University of Michigan.

"Most development studies texts shy away from discussing economics in any real depth, but this one does not. It provides the reader with a rigorous, but accessible - and critical - account of the importance of economics to the study of development, and is highly recommended." Professor Ray Kiely, School of Politics and International Relations, Queen Mary University of London.

"A wonderful resource for anyone wanting to think rigorously about national and international policy for human development, this book brings key elements of development economics in accessible language. The book synthesizes much of the best thinking and lessons of best practice in the last half century of international development." Sakiko Fukuda-Parr, Professor, Graduate Program in International Affairs, The New School, New York.

Michael Tribe is a development economist whose principal overseas research, consultancy and teaching experience has been in sub-Saharan Africa, in Uganda and Ghana in particular, over four decades. He has been the Honorary Secretary of the UK and Ireland Development Studies Association since 2000.

Andy Sumner is a fellow of the Vulnerability and Poverty Research Team at the Institute of Development Studies. He is a cross-disciplinary economist with primary foci of interest in child poverty and wellbeing; poverty indicators, concepts, methods, approaches; and the politics of policy processes.

Routledge Perspectives on Development provides an invaluable, up to date and refreshing approach to key development issues for academics and students working in the field of development, in disciplines such as anthropology, economics, geography, international relations, politics and sociology.