Economy, Emotion, and Ethics in Chinese Cinema
Globalization on Speed 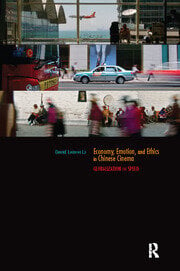 Economy, Emotion, and Ethics in Chinese Cinema: Globalization on Speed

The First and Second Comings of capitalism are conceptual shorthands used to capture the radical changes in global geopolitics from the Opium War to the end of the Cold War and beyond. Centring the role of capitalism in the Chinese everyday, the framework can be employed to comprehend contemporary Chinese culture in general and, as in this study, Chinese cinema in particular.

This book investigates major Chinese-language films from mainland China, Taiwan, and Hong Kong in order to unpack a hyper-compressed capitalist modernity with distinctive Chinese characteristics. As a dialogue between the film genre as a mediation of microscopic social life, and the narrative of economic development as a macroscopic political abstraction, it engages the two otherwise remotely related worlds, illustrating how the State and the Subject are reconstituted cinematically in late capitalism. A deeply cultural, determinedly historical, and deliberately interdisciplinary study, it approaches "culture" anthropologically, as a way of life emanating from the everyday, and aesthetically, as imaginative forms and creative expressions.

will appeal to students and scholars of Chinese cinema, cultural studies, Asian studies, and interdisciplinary studies of politics and culture.

Introduction: "Culture and Contemporary Chinese Cinema in the Second Coming of Capitalism" Part I: Homo Economicus: Individual Liberty and Market Dependency 1. "Primitive Accumulation and the Emergence of the Liberal Subject in the People’s Republic: Zhang Yimou’s Red Sorghum and Zhou Xiaowen’s Ermo" 2. "Crazy English with a Chinese Face: Zhang Yuan’s Documentary on the Neoliberal Pedagogy of the Self" Part II: Homo Sentimentalis: The Transformation of Family and Intimacy 3. Neoliberalism’s Family Values: (Re)production and (Re)creation in Ang Lee’s Trilogy and Zhang Yimou’s Happy Times 4. The Deregulation of Affect in Hou Hsiao-hsien and Yang De-chang Part III: Homo Ethicus: Towards Ecological Justice 5. "The World of Jia Zhangke Viewed: Neorealist Aesthetics against Neoliberal Logics" 6. "Abiding by Nature’s Time: The Cautionary of Cannibal Capitalism in Fruit Chan’s Dumplings"