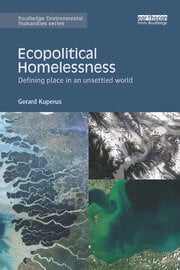 While our world is characterized by mobility, global interactions, and increasing knowledge, we are facing serious challenges regarding the knowledge of the places around us. We understand and navigate our surroundings by relying on advanced technologies. Yet, a truly knowledgeable relationship to the places where we live and visit is lacking.

This book proposes that we are utterly lost and that the loss of a sense of place has contributed to different crises, such as the environmental crisis, the immigration crisis, and poverty. With a rising number of environmental, political, and economic displacements the topic of place becomes more and more relevant and philosophy has to take up this topic in more serious ways than it has done so far. To counteract this problem, the book provides suggestions for how to think differently, both about ourselves, our relationship to other people, and to the places around us. It ends with a suggestion of how to understand ourselves in an eco-political community, one of humans and other living beings as well as inanimate objects.

This book will be of great interest to researchers and students of environmental ethics and philosophy as well as those interested in the environmental humanities more generally.

Acknowledgements
Introduction
1. Nietzsche, the Wandering Philosopher
2. Lost at Home: Heidegger and the phenomenologists on Being-in-the-World
3. Plastic Places, Settled Nomads: An Analysis of Our Sense of Place Through Foucault and Deleuze
4. Walking and Thinking Mountains: Dōgen, Leopold, and the Tlingit
5. Conclusion: Toward an Eco-Political Homelessness

Gerard Kuperus is Assistant Professor at the University of San Francisco, USA, specializing in philosophy of nature and environmental philosophy.

"While it is deeply rooted in Continental thought, this important work takes this enterprise in many new and sometimes illuminatingly surprising directions. We live in a curious time in which we imagine that we are at home everywhere in an increasingly homogenous world, but we cannot see that this is precisely the mark of our alienation: although we are all over the place (and place is increasing the same place everywhere), we have no real sense of place. Kuperus’s wake-up call allows us to see Nietzsche’s refusal of the homogenous herd and his call to be true to the earth as having made the “turn to place.” The book also builds powerful new bridges into classical Zen thought (especially Dōgen Zenji) and indigenous Tlingit thought." –Jason Wirth, Seattle University, USA

"Place remains one of the most central and compelling themes in environmental philosophy, and Gerard Kuperus’s Ecopolitical Homelessness makes one of the most noteworthy contributions to this central concern in recent years. Kuperus insightfully diagnoses the unique form of homelessness that afflicts much of the industrialized global north and, increasingly, the world—a form of homelessness obscured precisely by the degree to which globalization and homogenization give us the superficial sense of being at home everywhere, while simultaneously alienating us from the particular local realities that make up genuine places. Calling for a radical transition in our thinking and acting, Kuperus outlines a persuasive new ecopolitics of belonging, which incorporates both implacement and nomadism. In so doing, he points toward the way in which we can be responsible inhabitants of a planet faced with diverse environmental, social, and political challenges." –Brian Treanor, Loyola Marymount University, USA

"Kuperus provides a fresh approach to what at times is in danger of becoming a worn topic. We all can benefit from the exceptionally clear expositions of Nietzsche, Heidegger, Deleuze and Guattari that convincingly connect their ideas to environmental problems. More than that, the sure use of Latour to reassess the relationships between nature and politics is extended beyond Euro-centric positions by the interesting attention to Dōgen and Tlingit peoples."–Robert Mugerauer, University of Washington, USA

"The development of the book progressively sheds light on the contemporary absence of home by opening the space for a deep reﬂection. It invites us to interact in a diﬀerent way with the places that we come across, by questioning anthropocentrism and looking for a political unity with other beings."
- Francesco Carpanini, Green Letters 23:2