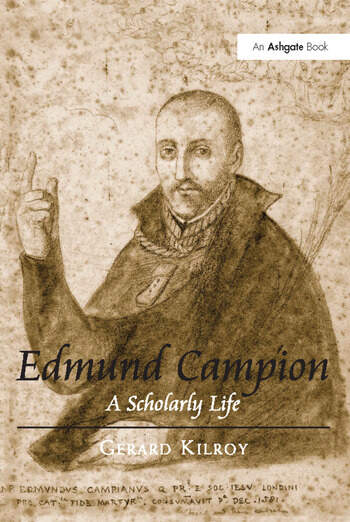 Edmund Campion: A Scholarly Life is the response, at long last, to Evelyn Waugh’s call, in 1935, for a ’scholarly biography’ to replace Richard Simpson's Edmund Campion (1867). Whereas early accounts of his life focused on the execution of the Jesuit priest, this new biography presents a more balanced assessment, placing equal weight on Campion’s London upbringing among printers and preachers, and on his growing stature as an orator in an Oxford riven with religious divisions. Ireland, chosen by Campion as a haven from religious conflict, is shown, paradoxically, to have determined his life and his death. Gerard Kilroy here draws on newly discovered manuscript sources to reveal Campion as a charismatic and affectionate scholar who was finding fulfilment as priest and teacher in Prague when he was summoned to lead the first Jesuit mission to England. The book argues that the delays in his long journey suggest reluctant acceptance, even before he was told that Dr Nicholas Sander had brought ’holy war’ to Ireland, so that Campion landed in an England that was preparing for papal invasion. The book offers fresh insights into the dramatic search for Campion, the populist nature of the disputations in the Tower, and the legal issues raised by his torture. It was the monarchical republic itself that, in pursuit of the Anjou marriage, made him the beloved ’champion’ of the English Catholic community. Edmund Campion: A Scholarly Life presents the most detailed and comprehensive picture to date of an historical figure whose loyalty and courage, in the trial and on the scaffold, swiftly became legendary across Europe.

Contents: Preface: A spectacle to all the realme; Among the ruins; Pilgrim to Rome; Et in Arcadia ego; All this travail; An immense harvest; Captive good; On the rack; Upon the publike stage; The lawes of England; We are made a spectacle; The legacy; Bibliography; Index.

Gerard Kilroy is the author of Edmund Campion: Memory and Transcription (Ashgate, 2005) and of The Epigrams of Sir John Harington (Ashgate, 2009). He is an Honorary Visiting Professor in the Department of English at University College London, read Classics and English at Magdalen College, Oxford, and was awarded his doctorate by Lancaster University.

"Among the many strengths of Gerard Kilroy’s scrupulously researched and finely written Edmund Campion: A scholarly life is the emphasis placed on the friendship and affection that marked Campion’s career and preserved his memory, and on the personal successes he attained even at the moment at which the Elizabethan state had intended to annihilate his body and reputation...His book is a contribution to the intellectual history of England and of Europe."

"In a project of extraordinary scholarly dimensions and the product of many years of interdisciplinary study across a very wide range of archives…this study, in my view, changes fundamentally our understanding of the way that Elizabethans saw the relationship between Church and State and it takes us as close to comprehending what Campion thought he was doing as we are ever likely to get…This is an extremely well written study – and likely to become a modern classic…this book is an exceptionally important intervention in the field of Reformation studies."

"Gerard Kilroy’s beautiful and moving biography, Edmund Campion: A Scholarly Life, provides an authoritative account of the influential Jesuit’s international renown, bringing to light as well his profound effect upon English Catholic audiences. Decades of archival research inform this monumental study … A total of twelve meticulously researched chapters color the extraordinary life of Edmund Campion, emphasizing his powerful intellect and calm composure in the face of terror … Kilroy’s impressive research provides evocative windows into key moments of Campion’s life ... It is a biography of interest to anyone who studies the Reformations, martyrology, Jesuit history, Elizabethan political policy, recusant households, and the role of manuscript and print. But it also appeals to general readers through its gripping story of a principled, courageous person who took great care for his students, fellow priests and laity, staying true to his beliefs in spite of great odds. It will be consulted for years to come."

"This is now our most complete and fairest account of the Jesuit mission to England and the life of Edmund Campion in particular."

"The author has explicated and integrated previously ignored - or indeed previously unknown - archival material. Equally important is the author’s exact examination of the accounts of the disputations in the Tower of London, the use of torture, and the final trial. ... a well written, well researched, and much needed biography of an important figure."

"This new biography is a worthy addition to the canon. Kilroy gives us a superbly detailed portrait of the character and qualities that made Campion so highly respected and offers a vivid insight into his spiritual life."

"Gerard Kilroy has freed his subject from hagiography to produce the most historically convincing, powerful and humanly engaging portrait we have…for anyone who is interested in understanding the religious and political context that framed Campion’s life or what it was that made him such a crucial figure to both sides in the propaganda war between Catholics and Protestants, Kilroy is the answer."

"A picture of St John’s and the Catholic underground comes out vividly in the admirable new biography Edmund Campion: A Scholarly Life by Gerard Kilroy."

"Gerard Kilroy’s Edmund Campion: A Scholarly Life vividly sketches the intellectual worlds of Oxford and Prague in the first half of Queen Elizabeth’s reign."

"Campion’s last months are of such interest that it is a welcome surprise to find the underground Catholic world of his Oxford years and the Jesuit humanist pattern of his years in Prague explore so vividly. Kilroy has been everywhere, read everything and quotes amply with good judgement."

"In this thorough and careful study, Gerard Kilroy has attempted to disentangle Campion’s own course from those of the other key English Jesuits, William Allen and Robert Persons, the different popes, and European politics. He provides a detailed and dispassionate analysis of the documentation, some of which has been known since Campion’s death and some of which has only recently been discovered."

"Rooted in exhaustive research in libraries and archives around the world and drawing on a number of manuscripts unknown to previous historians, it is a work of meticulous scholarship and measured and careful analysis that will surely be regarded as the definitive account of Campion for many decades to come."

"This is an outstanding book … Gerard Kilroy’s intention, discussed in his introduction, is to re-imagine through the documentary evidence available Campion’s scholarly and priestly life. And he succeeds in doing so impressively and without a hint of hagiography… Kilroy’s meticulous scholarship, careful reading of a vast range of historical, literary, and visual sources—including several previously unknown, recently discovered manuscripts—his perceptive analysis and interpretation of these, bring to life on the page the boy, the scholar, the Jesuit priest, the missionary, and the martyr; the man who as a young scholar, had been earmarked for preferment by Queen Elizabeth herself and whose death scandalised the whole of Europe …The chapter on Campion’s Oxford career is outstanding …The narrative of the mission is meticulously detailed, so too is the seamless account of Campion’s capture, torture, disputations, trial, and execution. … This is a fine book of meticulous scholarship and astute analysis. With its detailed footnotes and excellent bibliography, it will be an invaluable resource for everyone working on the history, literature, and theology of the period."

"Gerard Kilroy’s life is a masterful work: always based on a careful examination of the evidence, it is thoughtfully conceived and written. The author has discovered a wealth of new archival sources, most importantly a number of Latin manuscripts in Prague, where Campion spent what were probably his happiest years, which enables him to fill out Campion’s life in impressive detail...Kilroy’s case is that Campion, a major scholar, immensely popular with friends and followers and a man of exceptional integrity, was butchered in his prime by a brutal regime terrified by the failure of the Jesuit campaign in Ireland which threatened the stability of Elizabeth’s Protestant state… however the book is read, it adds immensely to our understanding of the period and as a testament to a brilliant life sadly cut short."

"Campion’s work in England emerges from Kilroy’s study in a wealth of fascinating detail, but engagingly, for Kilroy, as well as a first-rate scholar, is no mean narrator. Suffice to say that the early period in London organizing and conferencing; the challenging Letter to the Council, or ‘Brag’; travelling in disguise from inn to inn and manor to manor, always under threat of exposure and arrest, to say mass and deliver eagerly awaited sermons… I hope it is clear that Edmund Campion: A Scholarly Life is a book to buy and to keep, one that no reference library can afford to be without… The volume is beautifully produced, with colour plates, a credit to author and publisher … Kilroy creates a fully rounded portrait of a man of matchless eloquence, of enormous creative energy in scholarship, teaching, and preaching, in poetry and pageant; a lovable man with a remarkable gift for friendship and for impressing all he met by the quiet authority that he radiated."

"This is a welcome reinterpretation of the life of Edmund Campion."