Education and Learning in the Early Islamic World 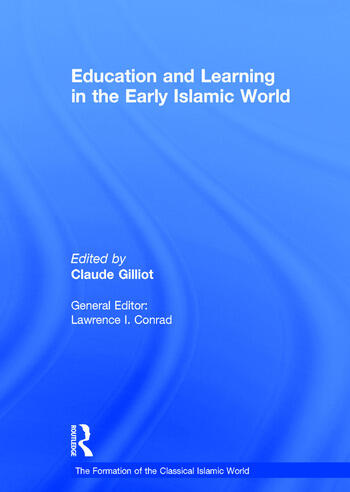 Education and Learning in the Early Islamic World

Studying education and learning in the formative period of Islam is not immediately easy, since the sources for this are relatively late and frequently project backwards to the earlier period the assumptions and conditions of their own day. The studies in this volume have been selected for the critical approaches and methods of their authors, and are arranged under five headings: the pedagogical tradition; scholarship and attestation; orality and literacy; authorship and transmission; and libraries. Together with the editor’s introductory essay, they present a broad picture of the beginnings and evolution of education and learning in the Islamic world.

Contents: Introduction; Bibliography; Part I Pedagogical Tradition: The etiquette of learning in the early Islamic study circle, Christopher Melchert; Muslim education, Ignaz Goldziher; Some aspects of the education of princes at the Abbasid court, Albert Dietrich; The age structure of medieval Islamic education, Richard W. Bulliet; Advice for teachers: the 9th century Muslim scholars Ibn Sahnun and al-Jahiz on pedagogy and didactics, Sebastian GÃ¼nther. Part II Scholarship and Attestation: The Islamic preacher wa’iz, mudhakkir, qass, Johannes Pedersen; The scholarly formation of al-Tabari, Claude Gilliot; The human element between text and reader: the ijaza in Arabic manuscripts, Jan Just Witkam. Part III Orality and Literacy: The oral transmission of knowledge in traditional Islam, Georges Vajda; The office of the Mustamli in Arabic scholarship, Max Weisweiler. Part IV Authorship and Transmission: The use of writing for the preservation of ancient Arabic poetry, F. Krenkow; Authorship and transmission in unauthored literature: the Akhbar attributed to al-Haytham ibn Adi, Stefan Leder; On the legacy of the classics in the Islamic world, Richard Walzer. On the transmission of Bukhari’s collection of traditions, Johann FÃ¼ck; The introduction of Hadith in al-Andalus, Isabel Fierro; The transmission of knowledge in al-Andalus (up to 300/912), Manuela MarÃ­n. Part V Libraries: Libraries and bibliophiles in the Islamic East, Adolph Grohmann; Arabic books and libraries in the Umaiyad period, Ruth Stellhorn Mackensen; The library of al-Hakam II al-Mustansir and the culture of Islamic Spain, David Wasserstein; Index.

Claude Gilliot is Professor of Arabic language and civilisation at the Université de Provence, France.

'[Gilliot] provides an excellent overview of the history of Western scholarship on Islamic education and surveys the results reached under the topical sections of this collected work. In addition, he provides a substantial bibliography on pre-modern Islamic education in general, including references not only to Western scholarship on the topic but also to the main works in Arabic.' Journal of Islamic Studies