Edward Said
The Charisma of Criticism 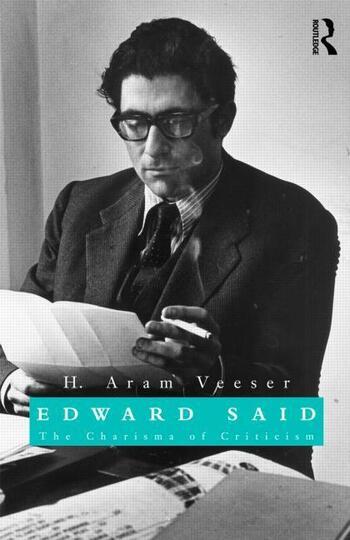 Edward Said: The Charisma of Criticism

This insightful critical biography shows us an Edward Said we did not know. H. Aram Veeser brings forth not the Said of tabloid culture, or Said the remote philosopher, but the actual man, embedded in the politics of the Middle East but soaked in the values of the West and struggling to advance the best European ideas. Veeser shows the organic ties connecting his life, politics, and criticism.

Drawing on what he learned over 35 years as Said's student and skeptical admirer, Veeser uses never-before-published interviews, debate transcripts, and photographs to discover a Said who had few inhibitions and loathed conventional routine. He stood for originality, loved unique ideas, wore marvelous clothes, and fought with molten fury. For twenty years he embraced and rejected, at the same time, not only the West, but also literary theory and the PLO. At last, his disgust with business-as-usual politics and criticism marooned him on the sidelines of both.

The candid tale of Said's rise from elite academic precincts to the world stage transforms not only our understanding of Said—the man and the myth—but also our perception of how intellectuals can make their way in the world.

Chapter I: The Charisma of Edward Said

H. Aram Veeser is Associate Professor at The City College of New York. He is coauthor of Painting Between the Lines (2001), and editor of The New Historicism (1989), The New Historicism Reader (1994), Confessions of the Critics (1996), and The Stanley Fish Reader (1999). Besides his work as a writer and critic, Veeser pursues outside interests that range from drawing and painting to motorcycling and competitive rowing.

"This is a brave book, written with gusto—a student from Edward Said’s early days at Columbia cuts through the myth and puts together the ‘real maestro,’ with respect, sympathy and meticulous attention to detail."—Gayatri Chakravorty Spivak, Columbia University

"The most engaging study of Edward Said now available, this book traces Said’s progress from highbrow denizen of the Ivy Leagues to a gritty intellectual on the world stage. It also gives an inside portrait of Said, from a one-time student who knew him for thirty-five years, depicting Said’s habits of mind, charisma, and contradictions. With a seemingly encyclopedic grasp of Said’s work, Veeser also writes with panache, offering his own example of creative criticism."—Jeffrey J. Williams, Co-editor of The Norton Anthology of Theory and Criticism

"At last, a critic has come along with the cunning, candor, and brilliance to pluck out the heart of the mystery of Edward Said. A mesmerizing read—and unlikely to be surpassed."—James Shapiro, Columbia University

"The late Edward Said is often pictured as a passionate fighter for radical causes. But in this provocative and eminently readable book, H. Aram Veeser reveals a Said who was far more divided than anyone thought."—Gerald Graff, author of Clueless in Academe

"Part biography, part memoir, part analysis and even part critique, Veeser's book is a fitting medium for addressing the life and work of a man whose achievements and aspirations far exceeded what could be contained in any one category or even series of categories. No one who knew Said will doubt the attribution of charisma—and those who didn't will get a good sense of it from this book. "—David Simpson, University of California, Davis

"Veeser has written an absolutely splendid hybrid of a book: part intellectual biography, part personal reminiscence, part homage, and part scholarly critique. As insouciant in its observations as Edward Said was in his person, Veeser’s book treats Said’s Princetonian polish as a central element of his thought and not simply as elegant haberdashery. Said’s outsized scholarly ambition and rhetorical cleverness are more than matched in Veeser’s pithy account by his unpredictability and penchant for self-contradiction, all of them hallmarks of the charismatic hero who refuses to play by the rules that govern common mortals. We desperately need just this sort of informed, critical, and yet balanced approach to our intellectual stars, rather than the hagiography so often demanded and supplied. Said, oppositional critic to the bitter end, deserves no less."—Vincent P. Pecora, University of Utah

"… Vesser (City College of New York) has written a beautifully crafted examination of the legacy of the renowned Palestinian literary critic, who died in 2003." – B. A. McGowan, Moraine Valley Community College (CHOICE Feb. 2011)