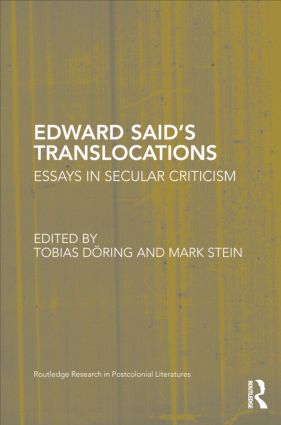 Working with processes of translocation enabled Edward Said to point out interdependence and complementarity across geographical borders and disciplinary boundaries while recognizing cultural difference and the distinct historical experiences of colonizer and colonized. This book brings into focus Said’s politics of reading, from his literary criticism in English to his political columns in Arabic. The international contributors—from Britain, Egypt, France, Germany, India, Switzerland, and the United States—investigate his intellectual legacies without necessarily identifying themselves with the critical positions these involve. Instead of treating his work as a unitary theoretical system, the various arguments explored offer a critical assessment of those situations in which his writing has entered into a productive relationship with other theoretical positions and interlocutors. The collection considers location, which has always been a central category in and for Said’s writing; readings, which designates the acts by which, according to Said, the world comes to be constituted; and legacies, which pertains to the many fields across the boundaries of established academic disciplines that have taken up Said’s challenges. The critical positions visited in this book include critical and cultural theory, postcolonialism, literary studies, theatre and performance studies, and visual and music studies.

Learn more about Mark U Stein >>

Mark Stein is Chair of English, Postcolonial and Media Studies at WWU Münster and President of the Association for the Study of the New Literatures in English (ASNEL). His research interests include anglophone cultural production from around the globe; transmigration and Diaspora studies; and critical and cultural theory.