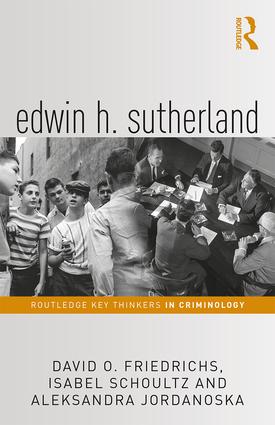 Edwin H. Sutherland is widely identified as the single most important and influential criminologist of the twentieth century. He is especially well-known for his path-breaking criminology textbook (first published in 1924), his promotion of a sociological (and scientific) approach to the understanding of crime and its control, his theory of differential association, and his work over his final ten years on white-collar crime, a term he is credited with having introduced.

This book explores the contemporary meaning of Edwin Sutherland and considers why criminologists today should continue to engage with his work. What can and should Sutherland mean to future 21st century criminologists, those working in the field say between 2021 and 2050, or some one hundred years after the 1921 to 1950 period that encompassed Sutherland’s criminological career? Which dimensions of Sutherland’s work have best survived the march of time and which are most likely to – and deserve to – survive going forward?

Making the case that Sutherland is important to both mainstream and critical criminologists, to positivistic criminologists and those who study crimes of the powerful, this book is essential reading for both students and scholars interested in exploring the enduring legacy of this key thinker in criminology.

1. Edwin Sutherland’s Life and Career as a Sociologist and Criminologist

2. Sutherland on the Field Of Criminology and Criminological Theory

3. Sutherland on Crime, on Types Of Crime, and on the Criminal Law

4. Sutherland Among Others: His Contemporaries and Competitors

6. Criminology in the Wake of Sutherland and His Enduring Legacy

David Friedrichs is Distinguished Professor of Sociology, Criminal Justice and Criminology at the University of Scranton (Pennsylvania, USA). He is the author of Trusted Criminals: White Collar Crime in Contemporary Society 4E (Cengage, 2010) and Law in Our Lives: An Introduction 3E (OUP, 2012), co-author (with Dawn Rothe) of Crimes of Globalization (Routledge, 2015) and editor of State Crime I & II (Ashgate, 1998). He is a former President of the White-Collar Crime Research Consortium, and a recipient of the Lifetime Achievement Award of the Division of Critical Criminology (ASC).

Isabel Schoultz holds a PhD in Criminology from the Department of Criminology at Stockholm University, and is currently employed as a researcher at the Sociology of Law Department, Lund University. She has published academic papers on a variety of topics, including denials of corporate crime, state crime in street-level bureaucracy and access to justice in the European Court.

Aleksandra Jordanoska is Lecturer at the School of Law, the University of Manchester. She has research expertise in the area of regulatory enforcement and corporate crime in the financial markets, and has published papers on complex fraud, financial crime, and arts in prisons. She completed her PhD in Law and Criminology in the School of Law, Queen Mary University of London, and her MPhil in Criminology at the Institute of Criminology, Cambridge University.

The more a discipline matures and develops the more interesting it becomes to document and reflect upon its history – including its key figures. The history of criminology includes a set of key thinkers who have defined the subject, renewed its theory and refined its methodology.

The volumes in this series are stand-alone introductions and critical examinations of the life and work of key thinkers in criminology. These volumes collectively contribute to writing and rewriting criminology’s history by adding a distinctive line of inquiry: the focus on the ideas of some of the most inspiring figures from its past.